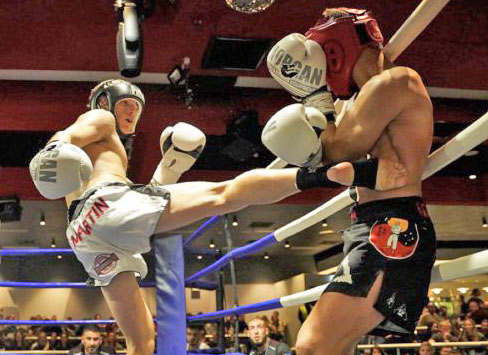 TRAINING six days a week has paid off for Roselands resident Tyson Martin, 17, who is the youngest ever fighter selected to challenge for the NSW State K1 Kickboxing title next month.

Earning his stripes at Campsie’s Australian Kickboxing Academy under founder and coach Jim Perdios, Tyson will be the first of the gym’s athletes to fight for the title on July 22 at North Sydney Leagues Club.
The Academy is thrilled that after being established by Perdios in 2015, they are on the cusp of winning their first championship after just seven years.
“We are confident of Tyson’s success and sure that his drive, dedication and hard work will see him fulfil his aspirations of going on to become a world champion,” a spokesperson said.
Always very sporty, Tyson took up Kickboxing at age eight and it soon became his sport of choice.
Coaching young Kickboxers and working in the family restaurant when he is not training twice a day for four to five hours, Tyson definitely has his eye on the prize.
“I’m really excited to have this opportunity to challenge for the NSW State K1 Kickboxing title,” he said.
“My goal is to turn professional and I feel like everything is falling into place but I want to stress to young people that you don’t get anywhere without hard work.
“You have to find your limits and push past those limits to achieve your goals; as long as you are dedicated you will have success.”