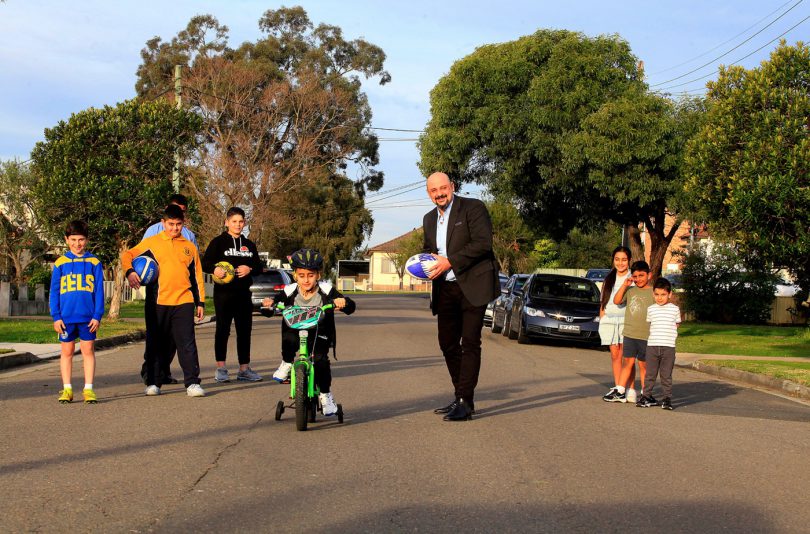 CANTERBURY Bankstown children could be among the first in NSW to enjoy a more fun childhood outdoors reminiscent of years gone by after Councillor George Zakhia (pictured on Virtue Street, Condell Park, with neighbourhood children) requested the council adopt a ‘street play’ strategy in the 2020-21 Operational Plan.

REMEMBER playing street cricket all summer long or being the best in the street at hula hoop, handball or hopscotch?
Canterbury Bankstown children could now get the chance to have those memories, friendships and more opportunity to be active after Cr George Zakhia asked council to “consider how street play can be incorporated into the future development of strategies and plans for vibrant and liveable neighbourhoods”.

Cr Zakhia had already brought together about 70 of his neighbours when he conducted a full Anzac Day service in his Condell Park street a couple of months ago and wanted to take the initiative further.
“The idea has been successfully trialled overseas and the 1000 Play Streets is a national movement encouraging local streets as places to come together with neighbours for socialising and play,” he said.
“I can’t think of a better way to get kids off their devices and computers and outside enjoying the sun and exercise while building friendships,” he said.
“I’m sure we all remember playing on the street as kids, with footy, cricket and riding our bikes always popular. Unfortunately this has largely disappeared.”
Once the council’s 2020-21 Operational Plan is finalised later in the year, residents will be able to apply for a permit to temporarily close streets to through traffic, making street play safe.
“Whether it runs once, over school holidays or say every Wednesday after school, a closed street for play can work for your neighbourhood,” Cr Zakhia said.
“Think about how awesome this will be for our children.”