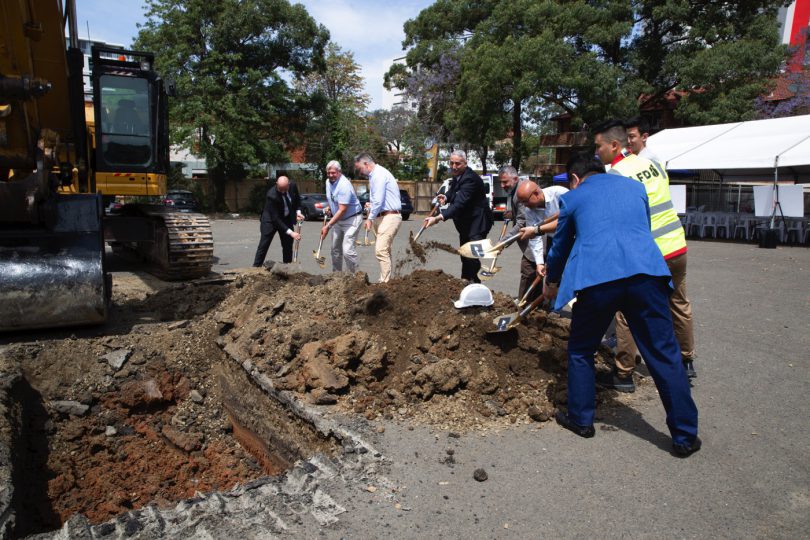 CONSTRUCTION is underway on the $320 million Auburn Square development on the site of the former Auburn RSL Club.

Developer Tian An LFD has appointed the Binah Group to build the 427-unit residential and retail development in Northumberland Road, with the official sod-turning ceremony held on site last month.
Trying to beat a looming December 31 deadline, qualifying home buyers only need to raise a five per cent deposit to secure a new property, with the Federal Government matching this with another five per cent, and new home buyer grants of $25,000 are also available.
Changes to the value cap in Sydney for qualifying properties from $700,000 to $950,000 unveiled in the 2020 Federal Budget, are also proving to be a strong drawcard for first homebuyers.
Senior sales director Ben Stewart confirmed that approximately 80 per cent of sales to date have come from those on the hunt for their first home, buoyed by government incentives which offer discounts up to $69,000.
“We have been amazed by the response from locals and those further afield, toward Tian An LFD’s vision to create a beautifully appointed, family-friendly sanctuary complete with roof top gardens and ground floor retail,” Mr Stewart said.
One first home buyer delighted by the project is 28-year-old Marie Karykis who has bought a two-bedroom apartment in the development after being disappointed by the prices of entry level apartments in the Inner West where she was living.
“Auburn Square and government incentives have both presented me with an incredible opportunity to secure my first home after searching for a long time prior but always finding myself priced out of the market,” she said.