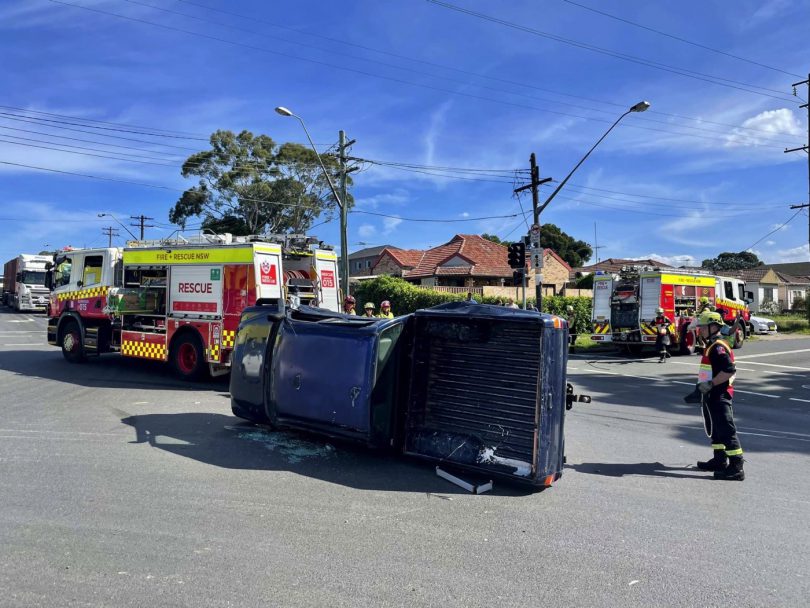 AN elderly woman died and two teenagers were hospitalised after a house fire in Campsie last Tuesday afternoon.

Just before 5pm, emergency services were called to the home in Evaline Street near Loftus Street, following reports of a house fire.
Despite the efforts of emergency services, an 80-year-old woman died at the scene and two boys – aged 14 and 16 – were evacuated from the home and taken to hospital.
Campsie Police are investigating the blaze. Inquiries are continuing and a report will be prepared for the information of the Coroner.

Hunt after stabbing, multiple accidents
ONE man was stabbed and two innocent motorists were seriously injured during what police believe began as a road rage incident at Georges Hall on Monday night.
Appealing for public help, Detective Chief Inspector Darren Sly from Bankstown Police, says they are looking for a silver Toyota Hilux dual cab ute which would have “substantial front end damage” as a result of the impact from multiple crashes.
Describing it as “a miracle” that no-one was killed, he said the actions of those in the ute were “appalling” and “downright dangerous” and detectives were following a number of lines of inquiry.
Police were told that a silver Honda Civic driven by a 20-year-old man with a 17-year-old male passenger, were travelling south along Henry Lawson Drive when they were involved in a confrontation with two men in a silver Toyota Hilux ute shortly before 10.45pm.
About 200m south of Rabaul Road, the ute allegedly then forced the Honda off the road and into bushland where it has rolled onto its roof.
When the Honda driver and his passenger freed themselves, they were allegedly confronted by the men from the ute.
During the confrontation, the 20-year-old was then stabbed in the back of the leg just under the buttocks before the ute’s occupants fled the scene, travelling north along Henry Lawson Drive at high speed.
However at the intersection of Flinders Road, the ute allegedly crossed to the wrong side of the road and hit a BMW motorcycle ridden by a 24-year-old male, and a silver Toyota Camry driven by a 58-year-old man before driving off again.
Paramedics treated the men from the first vehicle at the scene and took the man who had been stabbed to hospital in a serious but stable condition. The other man was treated for minor injuries.
The driver of the Camry suffered chest injuries while the motorcyclist suffered leg and rib injuries, and they were both taken to Liverpool Hospital.
Anyone who can identify the men involved or who may have dashcam footage of any of the crashes or of the ute, is urged to contact Crime Stoppers: 1800 333 000 or nsw.crimestoppers.com.au. Information is treated in strict confidence.

Three stabbed after unit noise complaint
THREE people were allegedly stabbed in Villawood early Saturday morning.
About 1am, emergency services were called to a unit on Woodville Road following multiple noise complaints.
On arrival, police located a large group at the unit who allegedly threw projectiles at officers.
As police were dispersing the crowd, a 19-year-old man was found on Kirrang Avenue with stab wounds to his stomach, shoulder and thigh. He was taken to hospital in a stable condition.
A short time later, two boys – aged 16 and 17 – presented at Blacktown Hospital with stab wounds. Both in a stable condition.
Police established separate crime scenes and commenced an investigation into the circumstances surrounding the woundings, which are all believed to have occurred in the Villawood area.