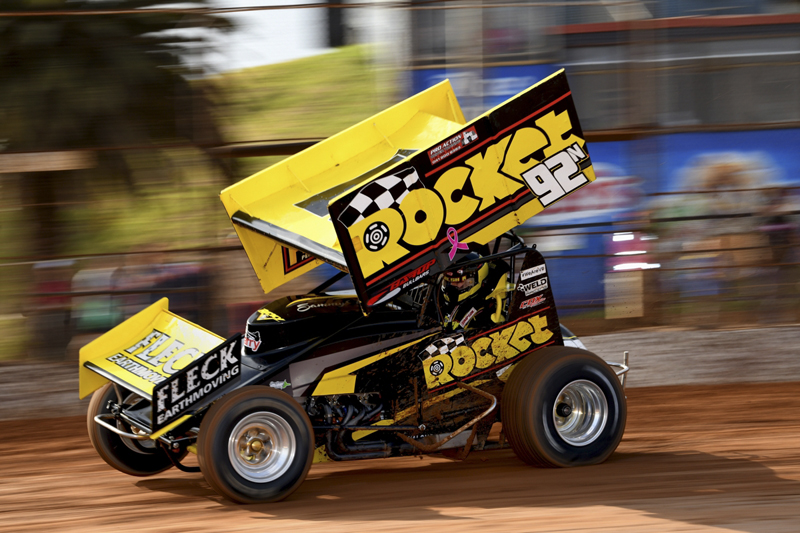 SAM Walsh was an unstoppable force in winning the fourth round of the Ultimate Sprintcar Championship NSW for Valvoline Raceway’s Ultimate Pink Night, presented by Aussie Forklift Repairs last night.

Walsh stormed the Rocket Industries entry off the front row for the 30-lap A-Main and simply drove away from his rivals to score without challenge in a dominant performance.
Starting alongside the impressive Daniel Cassidy, Walsh smoked through lapped traffic to win from a barnstorming Matt Dumesny who came from the seventh row of the grid to finish in second.
Robbie Farr, who admitted that he struggled early, soldiered back to third place by the fall of the chequers to lead home points leader Marcus Dumesny in fourth and Ben Atkinson rounding out the top five.
James Thompson came home in sixth ahead of Jackson Delamont, Daniel Sayre, South Aussie Ryan Jones and then Jeremy Cross in 10th.
Daniel Cassidy wound up an eventual 11th which was not a true reflection on his speed and form throughout the night.
Max Dumesny came in 12th ahead of Grant Tunks, Grant Anderson, Michael Stewart, Troy Little, Luke Stirton (who won the B-Main) Mark Attard, Kiwi Brett Sullivan, Matt Geering and final finisher Victorian Andy Caruana.
DNF’s were Alex Orr who had moved up to second place and was looking spectacular as always, before he pulled out after an apparent issue with the car.
Blake Skipper was also a DNF and James Duckworth unfortunately flipped in turn two.