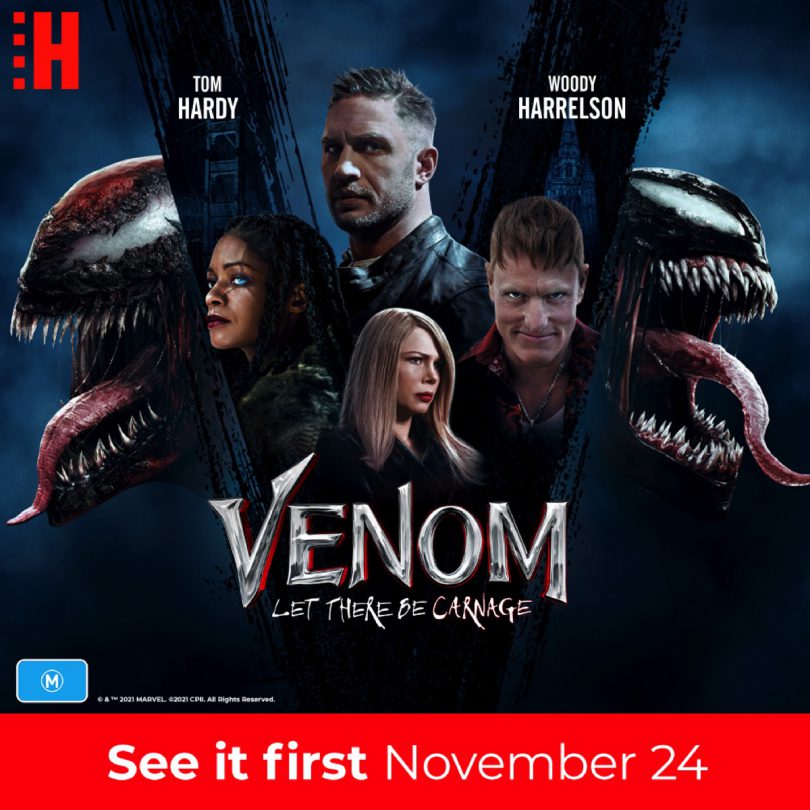 ACADEMY Award nominated actor Tom Hardy returns to the big screen in ‘Venom: Let There Be Carnage’, as one of Marvel’s greatest superhero characters, and lucky fans can win two family Hoyts Bankstown passes to see it when it debuts this Thursday.

Hoyts Bankstown manager Susan Kebblewhite says it has been wonderful to see the cinemas come alive again as more people get out and about in search of ‘big screen’ entertainment.
“We are offering two family passes a week in the lead-up to Christmas to make it easier on budgets and give more locals the chance to enjoy all the latest films,” she said.
In this science fiction thriller, Eddie Brock (Hardy) is struggling to coexist with his ‘symbiote’, a shape-shifting extraterrestrial called Venom.
When deranged serial killer Cletus Kasady also becomes host to an alien symbiote, Brock and Venom must put aside their differences to stop his reign of terror.
‘Venom: Let There Be Carnage’ (M) is directed by Andy Serkis and also stars Michelle Williams, Naomie Harris, and Woody Harrelson in the role of the villain Cletus Kasady/Carnage.
Also showing this week, ‘Boss Baby: Family Business’ (PG) is a computer-animated comedy featuring Boss Baby (Amy Sedaris) requesting help to stop a professor (Jeff Goldblum) from erasing childhoods worldwide.
For more info, go to hoyts.com.au.
To enter for tickets, simply scan the QR code or head to localnewsplus.com.au and fill in an entry form.