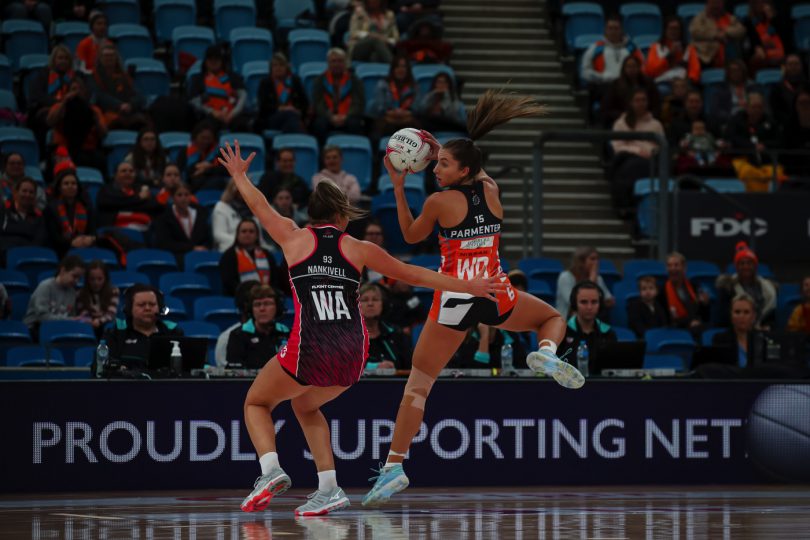 THE Giants have the 2021 minor premiership in their sights after recording a clinical 54-45 victory over Melbourne Vixens to maintain top spot on the Suncorp Super Netball ladder.
The league leaders made light work of the struggling Vixens at Brisbane’s Nissan Arena on Wednesday night to capitalise on NSW Swifts’ upset loss to Collingwood Magpies and move one game clear of their Sydney counterparts and the surging West Coast Fever.
The Giants looked comfortable for most of the contest and led by as many as 15 goals in the fourth quarter but another late scoring surge from the Vixens created a few anxious moments for the victors.
While the result has locked up a top-four finish for the first time since the 2018 season, upcoming clashes with the Lightning and Fever will determine if the Giants can hold on to claim their second ever minor premiership.
The Giants led 14-12 after one quarter and while the Vixens held strong at the defensive end, their scoring woes continued as they could only conjure up eight points in the second term.
The Giants extended their seven-goal halftime advantage into a 43-32 lead and interchanged a number of substitute players to close out the match.
While the Vixens pushed hard to reduce the margin in the final term, they failed to reach the 50-point mark for the fourth successive game.
Giants next face the Sunshine Coast Lightning today, August 3, at 3.30pm at Nissan Arena in Brisbane.