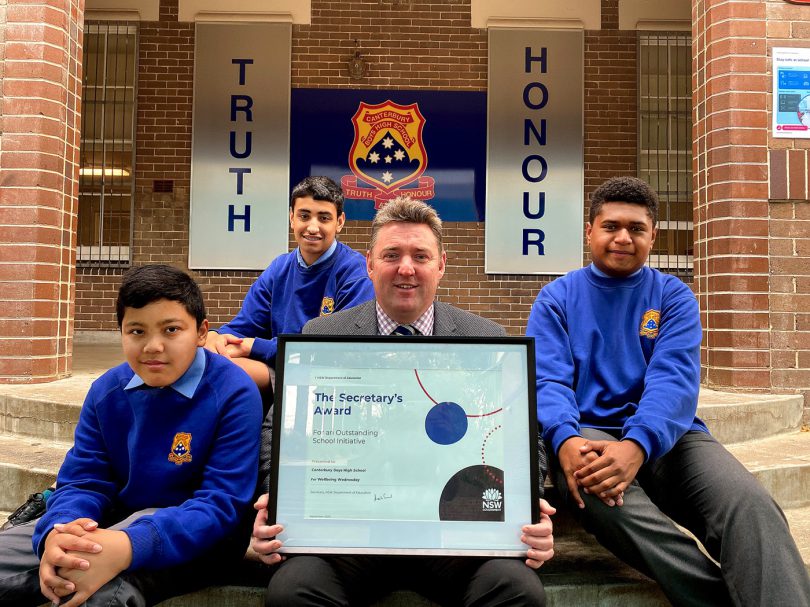 CANTERBURY Boys High School Principal Ross Dummett with students Arshad Permana (from left), Ethan Arena and Jemesa Narawa and their 2020 NSW Secretary’s Award for Excellence which the school has won for its ‘Well-being Wednesday’ initiative introduced to relieve the stress of online learning during the Covid lockdown.

TWO outstanding Canterbury Bankstown schools and an inspiring teacher have been recognised in the 2020 NSW Minister’s and Secretary’s Awards for Excellence.
Revesby Public School teacher Janet Phillips has won the Minister’s Award for Excellence in Teaching.
The first-time winner provides ‘demonstration’ lessons not just at Revesby but for other schools.
“They’re based on what is termed ‘explicit’ teaching where there are clear learning goals, examples and support,” she said.
Winning the Secretary’s Award for an Outstanding School Initiative, Canterbury Boys High introduced ‘Well-being Wednesday’ as a way to relieve the stress of online learning during Covid.
Principal Ross Dummett said families were encouraged to engage in pursuits other than study to increase connection.
“They were doing activities like board games, cooking, walking the dog, writing in their reflection journals or exercising together,” Mr Dummett said.
“It has been a very successful initiative.”
St Joseph Banks High at Revesby took out the Secretary’s Award for School Achievement for their ‘Senior Pathways Transition’ program.
Relieving Principal Brett Palmer says the school boasts a hard-working transition team who, for the last five years, have ensured that every student wanting to go to university, has done so.
“I don’t know if there are too many other schools in the State that can lay claim to that,” he said.