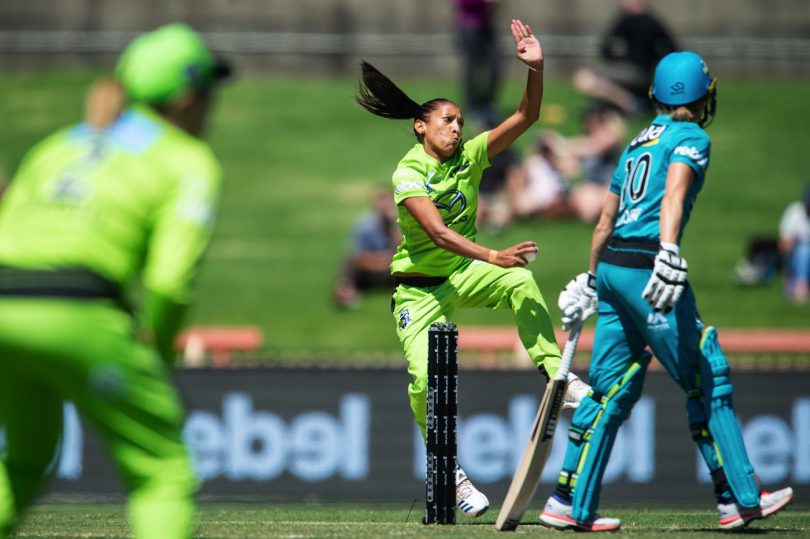 THE pandemic might be a new challenge for sports administrators but rain was a much more familiar disruption to the opening rounds of the Women’s Big Bash League (WBBL).

Rain forced the Sydney Thunder’s first scheduled game against the Sydney Sixers to be abandoned on Sunday and on Monday, they were left sitting at 2 for 13 when rain interrupted their next game against the Melbourne Stars.
Playing her first season for the Sydney Thunder, England captain Heather Knight had scored four runs off six balls when the covers were rushed out after just four overs on Monday.
Speaking after the rain break, Knight admitted wryly that while the rain made her feel “very at home” as an Englishwoman, it was a disappointing result for the cricket fans who had turned out for the season’s opening games.
“It was great to see a few Thunder fans here today,” she said.
“Whatever support you can give us would be great. Fingers crossed we can get a game in.”
Fans will also be hoping that the weather clears before the weekend with games scheduled at the Sydney Showground on Saturday, October 31, between the Sydney Sixers and the Melbourne Stars, and on Sunday, November 1, between the Thunder and the Brisbane Heat.
Head coach Trevor Griffin is adamant the key to his group enjoying success in WBBL 06, is as simple as each player having belief in their own game.
“Our players have been selected for the skill and the quality that they have, and that’s my message to them . . . go out and be them,” Griffin said.