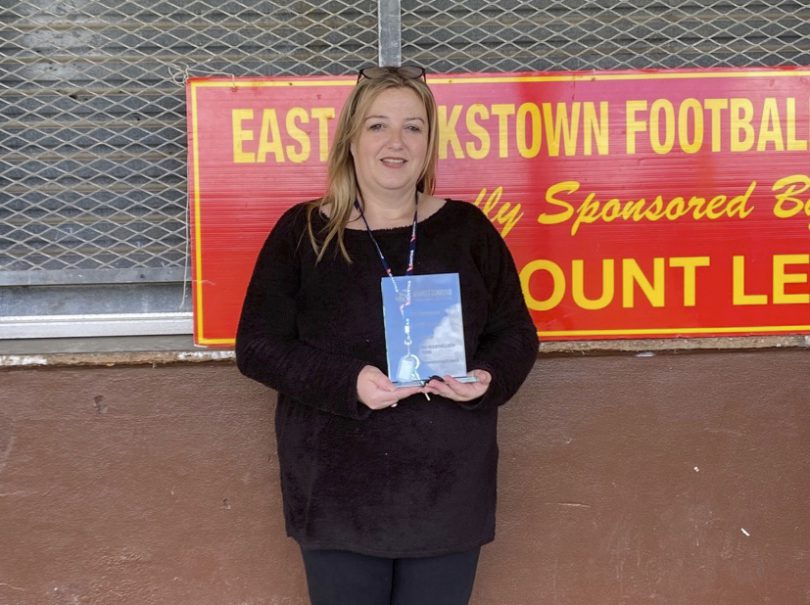 EAST BANKSTOWN FC committee member for 10 years and club member and volunteer for many more, Isabel Nohra has been named Bankstown District Amateur Football Association’s (BDAFA) ‘Volunteer of the Year’.

A strong advocate for community sport and women’s soccer, Isabel is the club’s Assistant Secretary, canteen manager and social media guru.
Described as one of the most adaptable and important members of the East Bankstown FC community, Isabel said she was thrilled yet shocked to win.
“It’s such an honour and I’m so grateful,” she said.
“But there are so many other volunteers that are very worthy and deserving also.”
Working in the disability area in recruitment, Isabel said giving back through volunteering was a natural instinct.
“Our club is all about community spirit and mentoring youth, giving them the opportunity to be somewhere where they feel they belong and can excel in life,” she said.
BDAFA General Manager Leanne Millar said choosing the ‘Volunteer of the Year’ was a difficult task for the board as the calibre of those nominated was so high.
“We couldn’t have gotten through the last two years without out volunteers who kept working behind the scenes even when there weren’t games,” she said.
“We want to acknowledge their hard work and commitment as we are eternally grateful.
“All of the Volunteer of the Year candidates from our 19 clubs are exceptional.”
Revesby Rovers FC volunteer Sonia Mira, described as “treasured asset to her club”, may not have won but she so impressed the BDAFA board they have recommended her for ‘Banks Volunteer of the Year’.
Likewise, Revesby Workers’ FC volunteer Keith Donnelly is making such an impact, the board has made a $5,000 donation to his initiative ‘Keith’s Closet’ which provides clothing and accessories to people with no support that have been admitted to hospital.
Isabel is now in the running for Football NSW’ ‘Volunteer of the Year’.