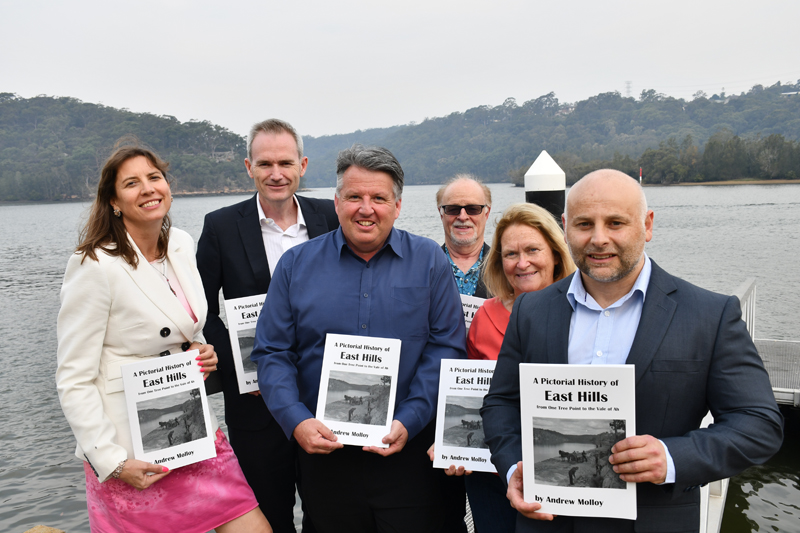 FEATURING a photograph of Mickeys Point, carbon dated showing Aboriginal activity more than 5,000 years ago, a new book, ‘A Pictorial History of East Hills from One Tree Point to the Vale of Ah’ by Andrew Molloy, was officially launched last week.

Attended by Banks MP David Coleman, East Hills MP Wendy Lindsay, former East Hills MP Alan Ashton and Councillors Linda Downey, Steve Tuntesvki and Molloy (pictured), the launch was at the boat ramp in the Georges River National Park.
“Looking from Mickeys Point across the river towards Picnic Point and plotting all the known Aboriginal sites, certainly makes one understand the wholeness of the Aboriginal nation,” Molloy said.
“It also makes the modern 200 or so years since then, merely short moments in time by comparison.”
The 210-page book is the long awaited sequel to Molloy’s best selling books on the histories of Padstow, Revesby, Panania, Picnic Point and East Hills and Milperra.
The book offers a comprehensive look at the district from the Dreamtime; through land grants and early cattle grazing; to market gardens and poultry farming; campaigns for the railway and life during the 2 World Wars and Depression years; right up until the current year.
It also has many feature chapters such as Recreation on the Georges River in the 1920s; Delivery Man and Early Shops; the three picture theatres; long lost estates and streets in the district; and films which have been made in locally from 1921 until the current year. There is even a light-hearted chapter about supernatural events including a bunyip, a haunted house and UFOs on Tower Street.
Molloy will be outside Parker’s Shoes, 70 Anderson Avenue, Panania, this Saturday, November 9, signing copies of the books from 9.30am-11.30 am.
The books can be purchased for $25 at Parker’s Shoes Panania or Revesby; or Professionals Real Estate Padstow.