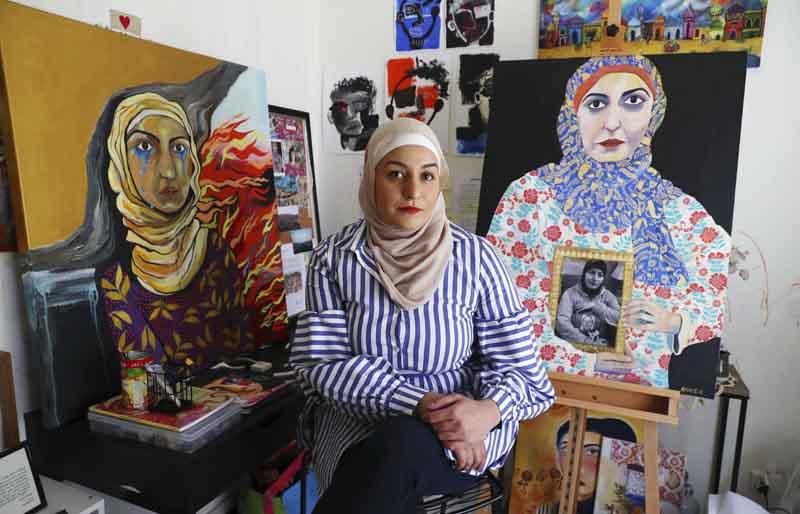 CHESTER Hill artist, lawyer, writer and Archibald Prize finalist Amani Haydar is among 26 artists, academics, entrepreneurs, entertainers, scientists and social advocates named as a finalist for the 2020 NSW Women of the Year Awards.

Also a women’s activist and executive board member of Bankstown Women’s Health Centre, Ms Haydar’s life hasn’t always been about celebration, with tragedy casting a shadow in 2015, when she lost her mother at just 45 to domestic violence.
“Art is definitely a way I expressed my sadness and grief but it was also the thing that empowered and healed me in a way,” she said.
Her current exhibition, ‘Painting Flowers’, on offer at the Peacock Gallery in Auburn until next week, is a tribute to women who have suffered from domestic violence.
“We (along with muralist Ms Saffaa) used a lot of native Australian flowers within the artwork,” Amani explained.
“They are able to withstand quite harsh environments which is symbolic I think of the way women can survive as well.”
The mother of two says there are no other art exhibitions in the pipeline for this year as she is keen to do more advocacy, with her legal skills coming in handy and creative writing about her experiences as a domestic violence survivor in the hope of bringing about change.
Nominated for the Woman of the Year award by Bankstown MP Tania Mihailuk, Amani said: “I am so grateful to Ms Mihailuk. It’s great to have the support of your local community and as so much of what we do is behind the scenes, it’s wonderful to have that recognition.”
Members of the public are encouraged to help decide the winners in four award categories, which are now open for online voting.
Voting closes Friday, February 14, at 11.59pm. Vote and read more about the finalists at women.nsw.gov.au. Winners will be announced on March 5.