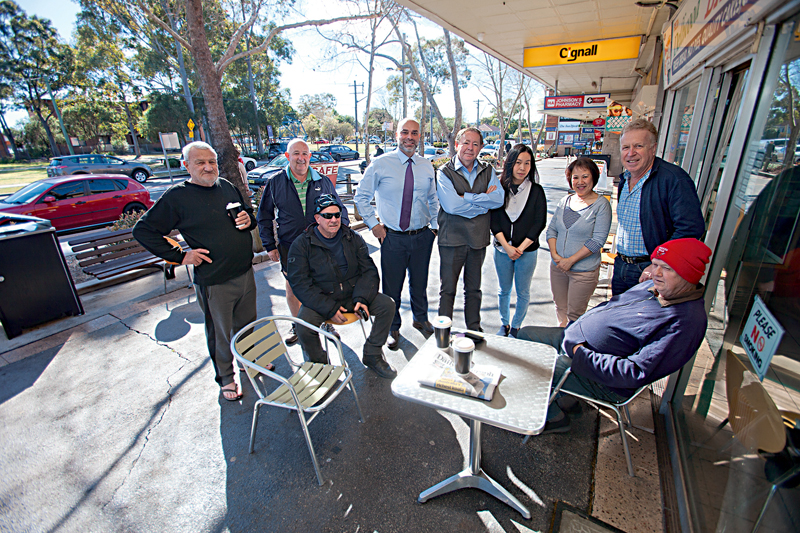 SOUTH Granville Ward councillors Tom Zreika, Paul Garrard and Glenn Elmore chat with residents at the Dellwood shops about their proposed plans for upgrading the streetscape at the shopping strip using funds from the Woodville Reserve Fund

PLANS to spend almost all of the $4.2 million remaining in the Woodville Ward Reserve fund on major infrastructure upgrades in South Granville were approved last week.

The estimated cost of the projects includes $700,000 to upgrade the streetscape, street furniture and paving at the Dellwood Street shops; $400,000 to build a new canteen and clubroom facility at Everley Park; $100,000 to renew and refurbish the cricket nets at Colquhoun and Guildford Parks; $350,000 on road widening at Constance Street; and up to $2.5 million on construction of new footpaths.

Cr Zreika said work on infrastructure such as footpaths in South Granville, was a basic issue which needed to be addressed.
Adding that he had once heard a radio commentator say if “you want to see what roads and footpaths looked like 100 years ago, go to South Granville”, Cr Elmore said the money would be well spent.
“I’m sure the people of Granville would really appreciate this,” he said.
However Cr Michael Zaiter sought assurances from the council’s director, Works and Infrastructure, Peter Fitzgerald, about the accuracy of the estimated cost of the projects.
He said he didn’t want the projects to be started and then have to finish them from general funds because there was no money left in the reserve.
Mr Fitzgerald confirmed that the estimates were done by professional staff and “not on the back of an envelope”, with Mayor Greg Cummings adding that the final tenders would all have to come back to council for approval anyway.