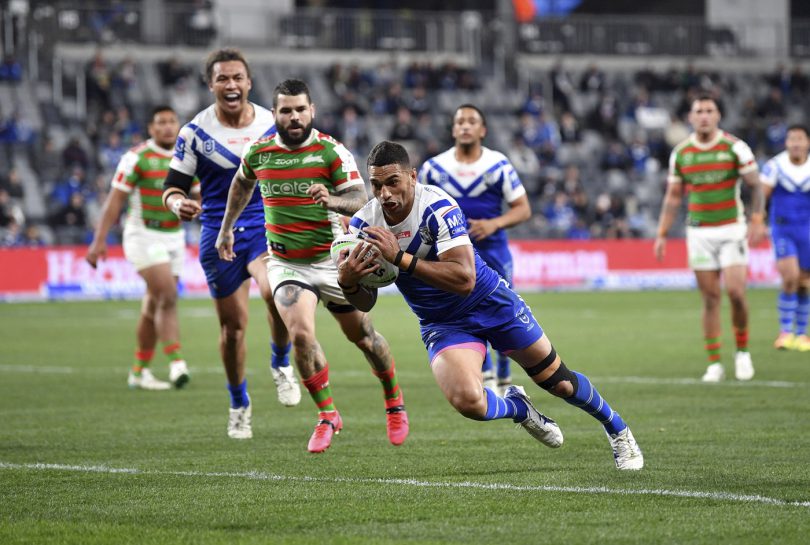 A GUTSY effort from the Canterbury Bankstown Bulldogs had them trailing by only two points at the break but they eventually fell to the Rabbitohs 26-10 at Bankwest Stadium on Sunday night.

The visitors opened the scoring inside the first three minutes but pressure from the Bulldogs for most of the first half, ended with Marcelo Montoya latching onto a deft Brandon Wakeham kick to get the home side on the board four minutes from half time.
Nick Meaney made no mistake to convert the try, with the Bulldogs heading into the sheds down 8-6 at the main break.
The second half started similarly to the first with the Rabbitohs crashing inside the first minute of the restart to increase their lead to 14-6.
The Pack replied minutes later when second-rower Raymond Faitala-Mariner reached out for his first try of the season, however, that chance was snuffed out and the visitors went in again.
Then a Souths’ intercept in the 79th minute caused heartache for Dogs’ fans, with the Rabbitohs taking down the Bulldogs 26-10.
The Bulldogs did well to hold Souths to an 8-6 lead despite defending most of the first half, but Coach Dean Pay was left lamenting the second-half slump.
“There was a lot more commitment there tonight,” Pay said after the match.
“I thought the 15 minutes after half-time really hurt us … but you can’t doubt their commitment and effort.”
The Bulldogs are poised to let Englishman Luke Thompson off the leash this week to ease the pain of a feared dislocated shoulder for Adam Elliott.
“He’ll bring a lot to the team,” Pay added.
The Bulldogs take on the Broncos this Saturday from 5.30pm at Suncorp Stadium.