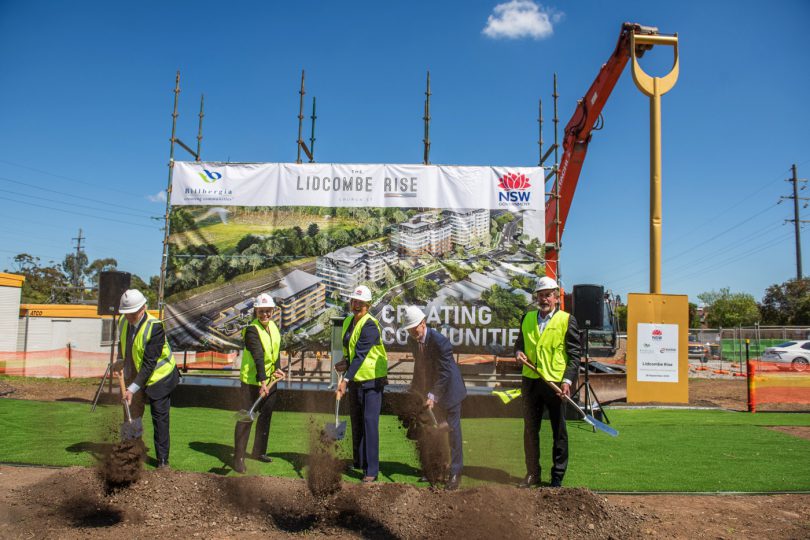 THE first sod has been turned on a $96 million development in Lidcombe which will deliver high quality private and social housing and create hundreds of jobs.

Minister for Water, Property and Housing, Melinda Pavey says the NSW Land and Housing Corporation (LAHC) is working with the Billbergia Group to develop vacant land and create a vibrant neighbourhood of mixed housing, well connected to public transport and other essential community services.
The Lidcombe Rise development in Church Street will feature four apartment blocks over the one-hectare site, offering 262 new apartments, including 53 for social housing.
Minister Pavey said the social housing to be constructed would be to the same high standard as private housing in the same project and is located near public transport, schools, the library, an aquatic centre, and public open spaces.
She said the project would also deliver an estimated 480 jobs as well as providing new social homes to support vulnerable people in an area of high demand.
“Communal courtyards and rooftop open spaces will also provide recreational areas for each building, to further improve the resident experience and enhance living standards,” she said.
Billbergia Group Managing Director, John Kinsella, said his group was all about “creating communities” and it was a great privilege to be working with LAHC to broaden the depth of social and market housing supply in Lidcombe and rejuvenate the precinct.
There is also a separate planning proposal, which seeks to increase the numbers of homes to 375 and could be incorporated “if a timely approval is achieved”.