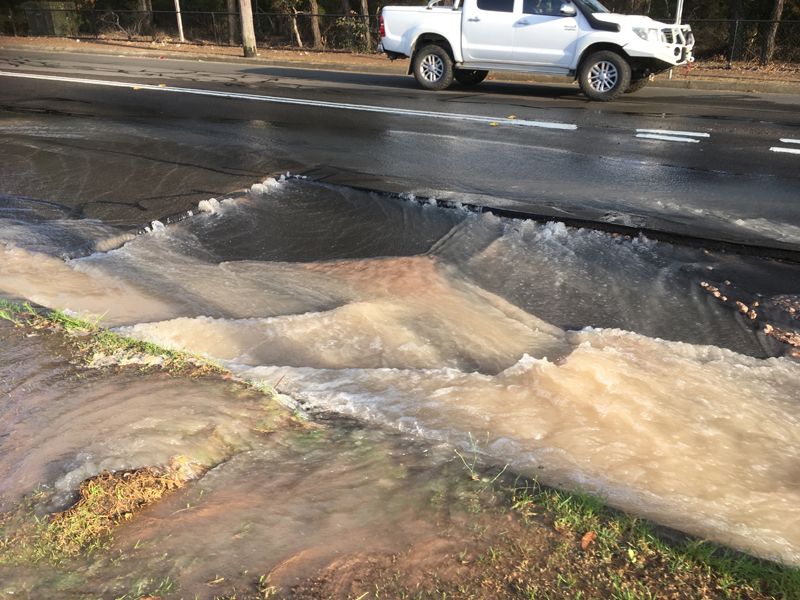 JUST days after Sydneysiders were told to cut back their water use, residents in Johnston Road at Bass Hill (pictured), woke to find thousand of litres gushing down the drain and ripping up parts of the street.

A spokesperson for Sydney Water said the water main break occurred at around 5.30am on Monday morning, with the first crews on site before 8am to isolate it.
Apologising to affected customers for the inconvenience, he said no properties were damaged during the incident.
“We’ll work to restore the roadway as soon as possible after the repairs are completed,” he said.
Investigations are underway to determine the cause of the break.
Periods of prolonged hot and dry weather are known to cause pipe expansion and joint movement, resulting in increased water main breaks and leaks.

Hose down risk
That’s when Level 2 water restrictions will come into effect as the impact of the drought devastating rural NSW towns and communities hits the city.
The tougher restrictions mean gardens can only be watered before 10am and after 4pm using buckets, watering cans, or smart and drip irrigation systems for a maximum of 15 minutes; cars can only be washed with a bucket or through a commercial car wash; and topping up pools and spas will be limited to 15 minutes a day using a hose with a trigger nozzle.
Premier Gladys Berejiklian and Minister for Water Melinda Pavey announced the tougher water restrictions, which are expected to save 78.5 gigalitres of water per year.
“Usually, we would expect to have Level 2 water restrictions come into effect when dam levels reached 40 per cent,” Ms Berejiklian said.
“But given the rapid rate of decline of our dam levels, we have decided to enact the next level of restrictions sooner than planned.”
Ms Pavey says the Bureau of Meteorology has predicted another hot, dry summer ahead.
“Businesses who rely upon outdoor water use as part of their operations need to get an exemption,” Ms Pavey said.
Fines include $220 for residential breaches and $550 for businesses. Details: lovewater.sydney/restrictions.