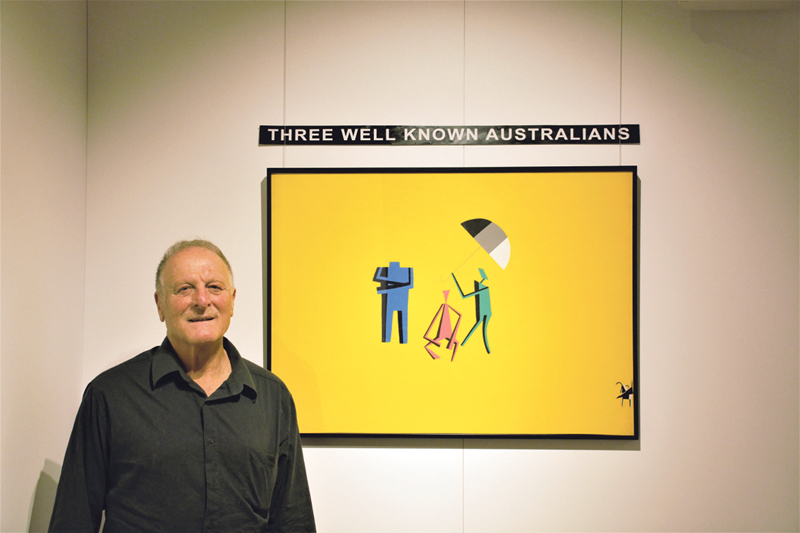 WHEN Martin Shaw painted ‘Three Well Known Australians’ in 1982, he sparked a guessing game that has entertained and intrigued generations of Australians.

On a pitshop at Merrylands RSL Heritage Centre until September 30, this enigmatic artwork has travelled to galleries, libraries and public halls non-stop since that time, inviting viewers across the nation to guess the identity of the three stick-figure styles it depicts set against a yellow background.
Mr Shaw has lost count of the number of times he has been asked in the past 37 years to reveal the identities of the three figures in his painting. Each time he has politely refused.
The whole point of the image is the public response, with viewers asked to guess the figures’ identity and record their thoughts in a yearbook.
The Sydney-based 63-year-old has letters from dozens of foreign embassies offering their interpretation of the artwork.
The Jordanian ambassador guessed Ned Kelly, Kylie Minogue and Cathy Freeman, while the Venezuelan ambassador suggested Australian solidarity, culture and spirit.
Mr Shaw seeks to create – and reflect back – a snapshot of the country at that moment in time.
“Some of these prominent people will be forgotten in 100 years’ time, but some will endure the test of time like Ned Kelly,” he says.
But the artwork is broader than the single painting.
“There’s three components to this touring exhibition – the painting, the letters and the yearbooks,” he said.
He describes the letters as a kind of ‘form guide’, providing ideas for each new viewer to engage with by writing their guess in the yearbook. They can also look back through past yearbooks for inspiration, or to compare.
Shaw describes his project as trying to ‘capture the spirit’ of Australia.
“It’s also a symbol of stability and says something about the nation of the time; the venues are always pleased to welcome it back.”