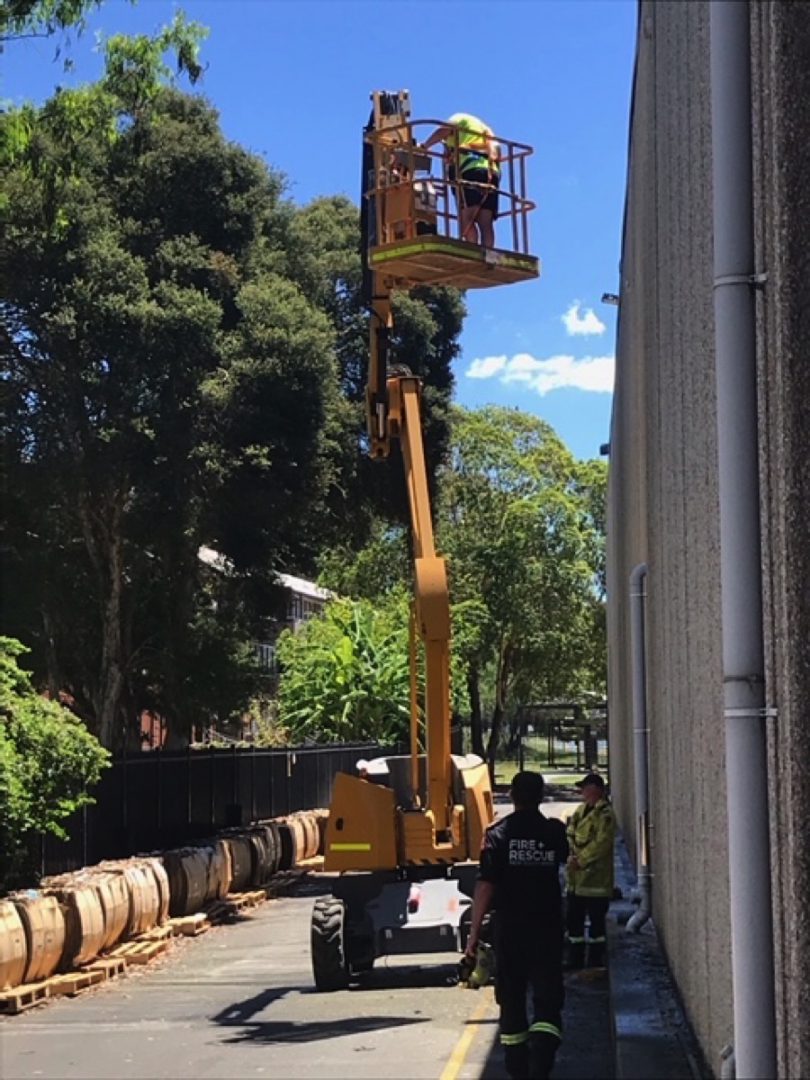 A MAN who was trapped on a scissor lift, 10 metres off the ground at Villawood, was rescued by Fire and Rescue crews.

Rescue crews, who were called to a site in Llewellyn Avenue just after 1pm on December 31, attempted to lower the man using the manual override controls but the scissor lift would not budge.
They used a Ladder Platform to rescue the stranded worker and bring him gently back on the ground. Acting Superintendent Tim Hassiotis from Fire and Rescue NSW (FRNSW), says this is a timely reminder that calling Triple Zero (000) when you are involved in or see a crash can be the difference between life and death.
The Triple Zero (000) service is the quickest way to get the right resources from emergency services to help you. It should be used to contact police, fire or ambulance services in life-threatening or time-critical situations.

DRUG and Firearms Squad detectives have charged a third man following raids targeting the manufacture and supply of illicit drugs. In August this year, detectives from the State Crime Command’s Drug and Firearms Squad, established Strike Force Aphrasia to investigate the manufacture and supply of prohibited drugs across Sydney’s south-west.
Strike force detectives raided a Bankstown unit on Wednesday, December 1, and allegedly seized more than $3 million cash and steroids. A short time later, they searched a property at Yagoona, and allegedly located a clandestine laboratory containing equipment consistent with the manufacture and supply of prohibited drugs, as well as 2000L of Gamma-Butyrolactone (GBL).
Two men aged 43 and 44 were arrested and charged.
Police also raided a Greenacre home on Tuesday, December 21, where a 37-year-old man was arrested and later charged with take part manufacture prohibited drug (indictable quantity), supply prohibited drug (commercial quantity), participate criminal group contribute criminal activity, and deal with property proceeds of crime (in excess $100,000).

Hunt for servo armed robber
POLICE are looking for a man who stole cash and cigarettes from a service station at Chester Hill.
A man armed with a knife entered the business on Woodville Road on Sunday, December 26, about 9.15pm and took cash and cigarettes before running from the scene.
Bankstown Police established a crime scene and began a canvass of the surrounding area, assisted by a Police Dog team. They would like to speak to a man described as being of Mediterranean/Middle Eastern appearance about 175cm tall with a thin build. At the time he was wearing a black hoodie, black track pants, black shoes and a face mask.
Anyone who has information about the incident, or who may have dashcam in the vicinity of the service station at the time, is asked to call Bankstown Police or Crime Stoppers.

Fourth charged in kidnapping
A FOURTH man has been charged over the alleged kidnapping of another man during a home invasion last year.
About 4pm on Wednesday, June 9, a man was allegedly abducted from a home at Bonney Street, Sans Souci.
Police were told a group of men forced their way into the house and confronted the occupants, including a woman and a 44-year-old man, before the man was allegedly then forced into a vehicle outside.
A short time later, a car matching the description of the vehicle was located on fire at Bankstown.
Investigators subsequently located the 44-year-old man in Padstow suffering minor injuries that evening.
So far during the investigation, detectives have charged three men aged 21, 23 and 24 over their alleged roles.
The fourth man, a 31-year-old from Cambridge Park, was arrested at a correctional facility at Silverwater and charged with be carried in conveyance taken without consent of owner, special aggravated break and enter and commit serious indictable offence – weapon, take/detain in company with intent to get advantage occasion actual bodily harm, and participate criminal group contribute criminal activity.
Investigations are continuing.

• Anyone with information that may assist police in their investigations is urged to contact Crime Stoppers: 1800 333 000 or https://nsw.crimestoppers.com.au. Information is treated in strict confidence.