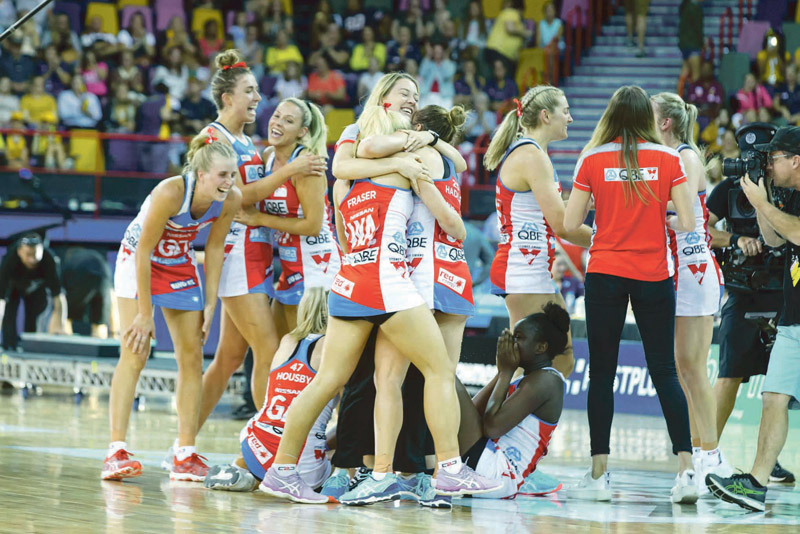 THE NSW Swifts are the 2019 Suncorp Super Netball Premiers after defying the odds to register a thumping 64-47 Grand Final victory over the Sunshine Coast Lightning at Brisbane Entertainment Centre on Sunday.

The Swifts dominated from start to finish, causing a huge boilover with most pundits expecting the Lightning to register their third-straight title win in as many years. But it didn’t play out that way with NSW winning every quarter, evening winning the last by a whopping seven, to bring the trophy to Sydney.
For the Swifts it is a sixth Premiership, a first since 2008 and also a first in the Super Netball era. The standouts on the day were MVP goal shooter Sam Wallace and a huge defensive effort which thwarted the reigning Premiers time and time again.
Head coach Briony Akle said she couldn’t be more proud of her troops.
“I know we’ve been saying it all season but we finally stuck to the script and controlled the game throughout,” she said.
“Some days you need everyone to have an amazing game at once and that’s what we had.
“The Lightning are an amazing club who we knew would keep coming but today we had an answer.
“To do that against the team who have been the benchmark for the past two years, is something everyone in the team should be very proud of.”
A stepping call and a missed shot by Steph Wood gave the Swifts an early advantage in the first quarter which they capitalised on and after five minutes, they led 9-4.
NSW, through Sam Wallace and Helen Housby, took full advantage of their chances and went into the halftime break leading by eight – 31-23.
The Lightning had opportunities to close the gap but faltered when they needed to convert.
At the last break, the Swifts had a commanding 46-36 lead and simply needed to stay calm in the final 15 minutes to secure the title.