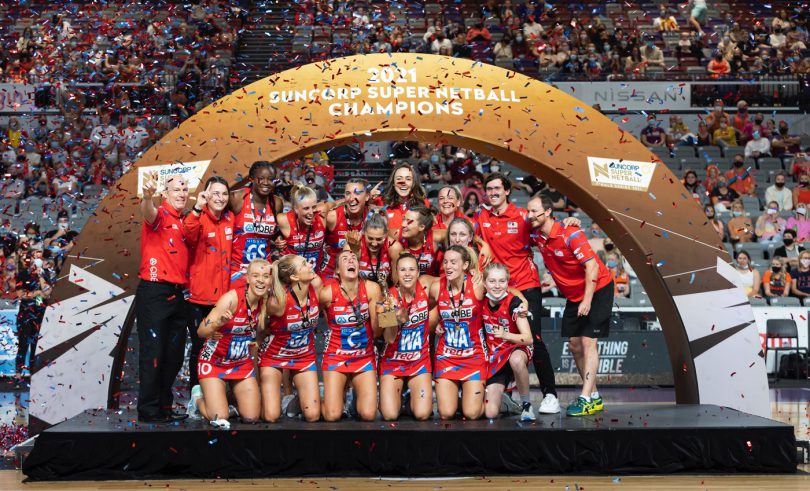 NSW Swifts have opened their account for the Super Netball season with a 75-64 victory over the Magpies as Helen Housby celebrated her 100th national league appearance in style.
Both teams were 0-2 entering Saturday’s contest at Ken Rosewall Arena but English international Housby ensured her milestone game would be a happy occasion with 43 goals for the defending champions.
Trailing by two goals after one quarter, coach Briony Akle shuffled her lineup to great effect as the Swifts outscored the Magpies 20-11 to lead 37-30 by halftime then built an unassailable lead thanks to a 23-17 third-quarter win.
Meanwhile Giants went down with a 64-52 loss to the Melbourne VIxens.
The Giants (1-2) welcomed back Jamie-Lee Price, Sophie Dwyer and Amy Parmenter after the Diamonds trio missed round two due to Covid-19 protocols but the visitors struggled to keep pace with the Vixens in the final quarter.
“I thought we were still in it going into that last quarter, but then we just couldn’t get our hands on ball and we made a few silly mistakes and as I said, you can’t afford to that against a team like Vixens,” coach Julie Fitzgerald said.
Giants are set to play Firebirds next today, Tuesday, April 12, at 8pm at Ken Rosewall Arena while the Swifts take on the Thunderbirds tomorrow, Wednesday, April 13, at Netball SA Stadium from 8pm.