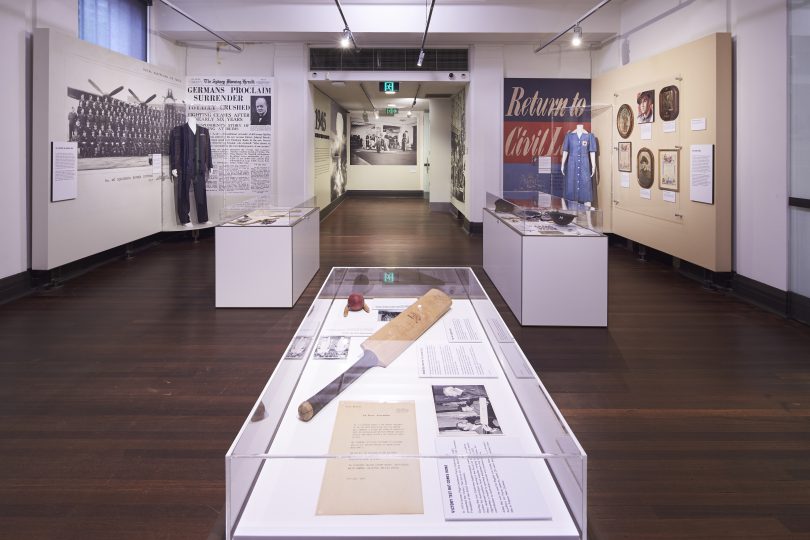 A cricket bat used in one of the “Victory Tests” in 1945 is featured in a new online exhibition at the Anzac Memorial in Hyde Park.

The struggles and triumphs of men and women during and after the Second World War are revealed in a new online exhibition at the Anzac Memorial in Hyde Park.
Acting Minister for Veterans Geoff Lee said 1945: From Hot War to Cold War will fascinate and educate everyone.
“This exhibition does an incredible job of taking us back in time and helping us understand what the Second World War meant for Australians at war, on the front line and back at home,” said Mr Lee.
“It gives our current generation the opportunity to reflect on the significance of the Second World War and remember the sacrifices made in all aspects of life.
“We look forward to having people visit the exhibition in person but while the current restrictions on public gatherings remain, it’s fantastic to have this exhibition online.”
This year will commemorate 75 years since the end of the Second World War.
Among the many images and artefacts on display is a photo of NSW Governor, Margaret Beazley’s mother Lorna, celebrating the announcement of Japan’s surrender in August 1945. She was captured in a group by Gordon Short, the official war photographer for the Department of Information.
Also on display is a cricket bat used in one of the “Victory Tests”. There were five unofficial test matches played in 1945 in England, between a British national team and an Australian team of veterans. The bat was donated to the Anzac Memorial by the Air Force Association.
The 1945: From Hot War to Cold War exhibition will be on display in the Assembly Hall of the Anzac Memorial and online for a year.
The Anzac Memorial holds an historical collection of 6,000 objects that tell the personal stories of servicemen, women and their families.
View online at anzacmemorial.nsw.gov.au/event/1945-hot-war-cold-war