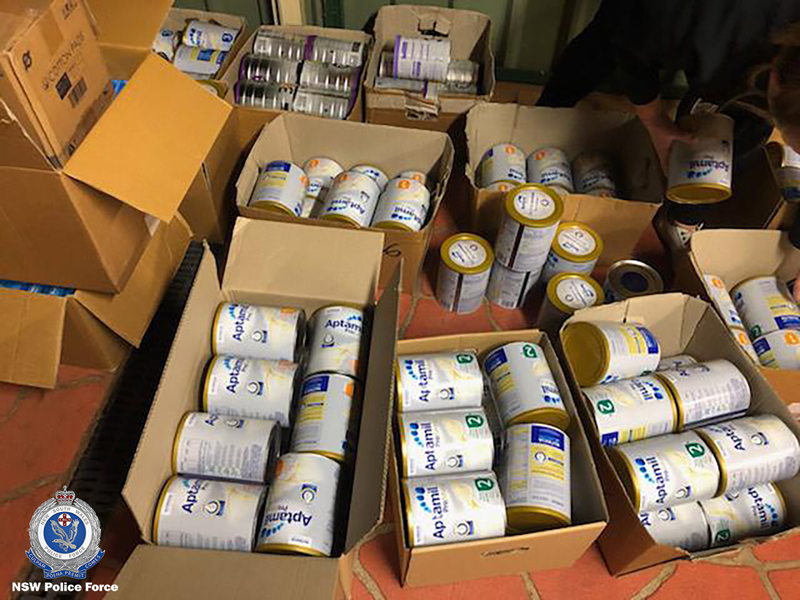 Working under Operation Lightfingers, investigators from Redfern Region Enforcement Squad (RES), began investigating and targeting the large-scale theft of baby formula from supermarkets and independent grocers across Sydney in October 2019.
Following extensive investigations, Operation Lightfingers detectives – with assistance from Bass Hill RES – executed four search warrants at two businesses at Bankstown, a warehouse at Milperra, and a home in Condell Park, earlier in the afternoon.
During the searches, officers allegedly seized more than $55,000 cash, and stolen goods, including baby formula, cosmetics and groceries, with a total value of more than $175,000.
A 28-year-old man and two women, aged 26 and 53, were arrested at the carpark on Canterbury Road, Bankstown.
The man and younger woman were both charged with 15 counts of larceny, and six counts of dispose property-theft (serious indictable offence).
Police will allege in court that the pair stole baby formula and electric toothbrushes worth more than $10,000 from supermarkets and retail stores across Sydney on 21 separate occasions.
The older woman was charged with six counts of disposing property-theft (serious indictable offence), knowingly dealing with the proceeds of crime, and goods suspected stolen in/on premises.
Police will allege in court that the woman was receiving the stolen goods to on-sell for financial benefit.
Redfern Region Enforcement Squad Commander, Detective Chief Inspector Stuart Bell, said businesses should remain vigilant, particularly as the festive season approaches.
“Christmas is typically a very busy period in retail with an influx of shoppers, and this can often be seen as an opportunistic time for potential shoplifters to target stores while staff members are busy with customers,” he said.
“Operation Lightfingers is a proactive and targeted policing strategy which we conduct throughout the year and allows police and retail staff to work together to target possible thieves.”