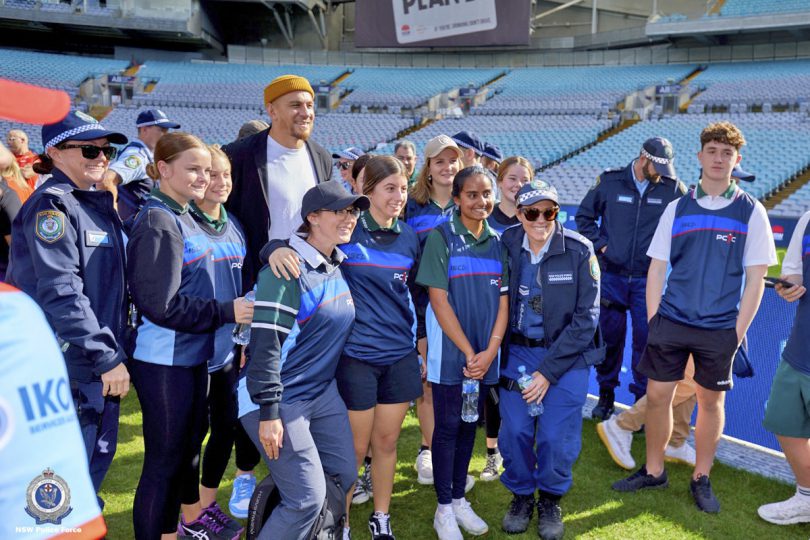 RUGBY union and league great, Sonny Bill Williams was amongst a group of sporting elite at Accor Stadium to help launch a new program to engage young people at risk of anti-social behaviour or criminal offending and steer them into programs that develop confidence, life skills and positive influences.

SPORTING and PCYC clubs will be coming to gather to engage young people who are at risk of anti-social behaviour or criminal offending, as part of the Sporting Partnership Industry program.
Ambassadors and pathway players from the Canberra Raiders, Manly Warringah Sea Eagles, Penrith Panthers, Parramatta Eels, Sydney Swans, A-Leagues’ Macarthur FC and Sydney FC, GWS Giants, Netball NSW and Cricket NSW will attend existing ‘Fit for Life’ programs that are delivered across the state year-round by NSW Police Force Youth Command and PCYC NSW.
The Sporting Partnership Industry program will begin on May 30 at four locations across the state including Auburn PCYC.
Sporting personalities and ambassadors from the National Rugby League, NSW Rugby League and Netball NSW will join forces with police to steer young people into programs that develop confidence, life skills and positive influences.
Deputy Premier and Minister for Police Paul Toole said the initiative would form part of a number of strategies to tackle the causes of youth crime.
Thousands of young people regularly attend Fit for Life sessions across NSW with numbers expected to grow through the rollout of the program.
PCYC Chief Executive Officer Dominic Teakle said the new partnership with sporting codes would strengthen Fit for Life programs and help put a stop to young people from making poor choices.
“Through physical fitness, nutrition and social engagement, Fit For Life aims to improve overall wellbeing as well as prevent and divert youth from offending behaviours,” Mr Teakle said.
“Having a role model to look up to is one of the most important things that can shape a young person’s future. These sporting ambassadors will help to illustrate that hard work and commitment to a positive cause is worthwhile.”