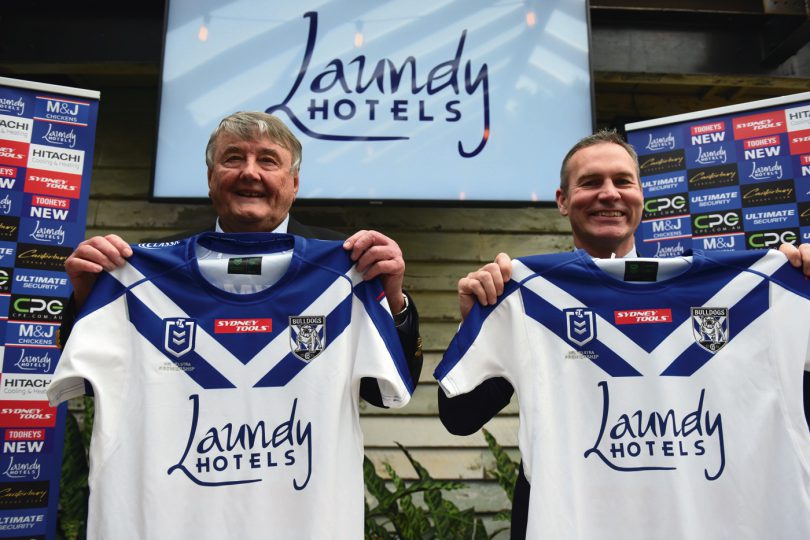 THE drinks were flowing yesterday at the Twin Willows Hotel in Bass Hill – albeit at a distance – with Laundy Hotels announced as the major sponsor of the Canterbury Bankstown Bulldogs until the end of the 2022 season.

The announcement comes almost a week after former Australian and NSW representative player Trent Barrett was signed as head coach for the next three seasons.
Bulldogs Chief Executive Andrew Hill said it had been a “great week for the Bulldogs” with player signings, a new coach, a strong win against Newcastle and now announcing Laundy Hotels as the club’s major sponsor.
He says the Laundy family prides themselves on creating venues that provide great hospitality and a modern family-friendly experience “and we feel as though that aspect of a rich history and family values is a great fit with what the Bulldogs stand for”.
Arthur Laundy, Director and owner of Laundy Hotels and lifetime Bulldogs supporter, saw the partnership as a representation of the history of both organisations.
“My family grew up in this area. My dad built the Twin Willows pub back in 1964, and it’s been in our family ever since. Back then, this place was the unofficial club house,” he said.
“We used to have a beer here with Lynne (Anderson) and her father Bullfrog, and Geoff ‘Robbo’ Robinson, who lived just up the road.
“The club’s come a long way since then and so have we. But at our heart, this is still our community. We’ve grown up together and we still share the same values.
“We want to be a fair dinkum part of the future of this club. We want to be the next generation family pub for the family club.”