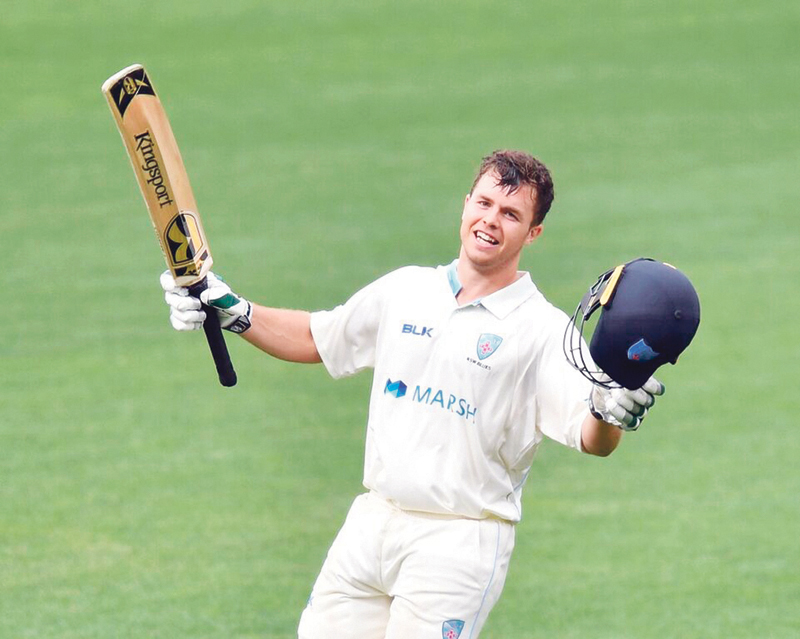 BANKSTOWN cricket sensation Daniel Solway has celebrated his selection in the NSW Blues side with a sensational century-making Shield debut.

‘Over century’ in Blues debut

The magnificent stroke maker plundered 133 not out in his record shattering feat.
His patience over the years has finally been rewarded and there will be no stopping him now with his career taking off with this explosive knock.
NSW were in all sorts of trouble as South Australian Chad Sayers ripped through them with 8 wickets.
Solway was joined by Peter Nevill and together they rescued the Blues. In recent seasons, Australian batsmen have been found wanting at the top of the order. Although it seems a belated debut by Top Dog Daniel, it is reassuring that the Revesby local is still only 24 and has many years ahead of him.
Bankstown’s cricket enthusiasts are delighted with the success of Solway and are eagerly awaiting his next games.
Daniel took over as first grade captain this season and won the Bankstown Sports ‘Player of the Year Award’ for last season and is a Development Officer with NSW Cricket, so he has always got the Blues foremost in his mind.
With skipper Solway away, all-rounder Nathan McAndrew took over leadership of the Bulldogs and his side holds the whip hand in the first-grade fixture against the Mosman Whales at Memorial Oval.
The visitors totalled 258 and in reply Bankstown are 3-109. Liam Marshall, 18, continued on his wicket taking way with 3-47 and he struck early with his lively pace. Tushaar Garg chimed in with 2-37 in his very economical spell. The reliable McAndrew claimed two wickets as did his good mate, left arm spinner Ben Taylor. The Bulldogs replied solidly with 3/109.
The club is delighted that Englishman Mark ‘Rocky’ Stoneman has returned to the Bulldogs kennel for another season. The former England opener looked in great touch following a strong season with Surrey as he cruised to 45 not out.