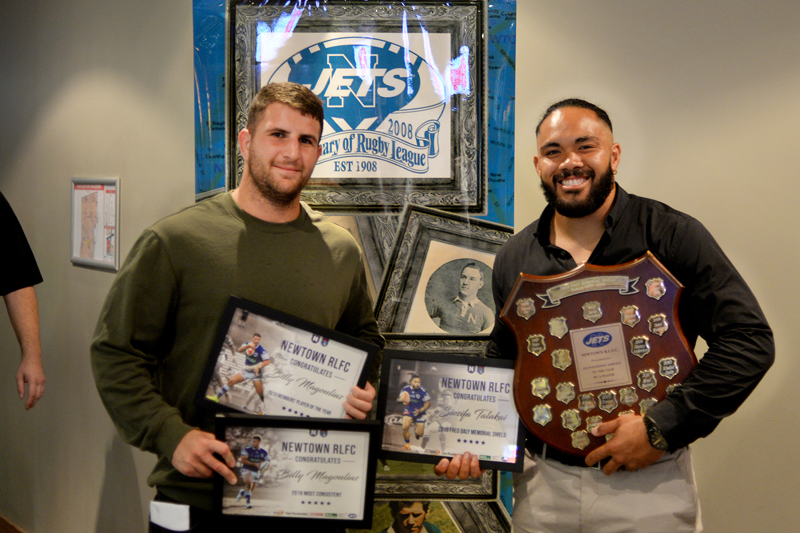 JAIMIN Jolliffe has been awarded the Newtown Jets’ Best and Fairest award.
The Jets celebrated their remarkable 2019 rugby league season at the Petersham RSL Club last Tuesday in front of a large and appreciative crowd.
Wins in the NSWRL Canterbury Cup NSW grand final and the NRL State Championship final, made 2019 one of the most successful years in the long history of the Newtown RLFC.

The thrilling manner in which both of these games were won was proudly recognised at the Jets’ Victories Dinner and Presentation Night, along with those players who won awards for 2019.
Other major award winners on the night were: Fred Daly Memorial Shield – Siosifa Talakai; Coach’s Award – Sione Katoa; Leading Try-Scorer – Will Kennedy; Leading Points-Scorer – Braydon Trindall; Best Back – Will Kennedy; Members’ Player of the Year – Billy Magoulias; Most Consistent Player – Billy Magoulias; Players’ Player – Scott Sorensen; Long Service Award – Matt Evans; Club Person of the Year – head coach Greg Matterson.
Former Newtown Bluebags and Jets players honoured by the crowd on the night were Jack Danzey, John Bradstock, Phil Sigsworth and Ron Sigsworth.
Newtown are already back in training for the 2020 season, with new signings and player transfers soon to be announced.