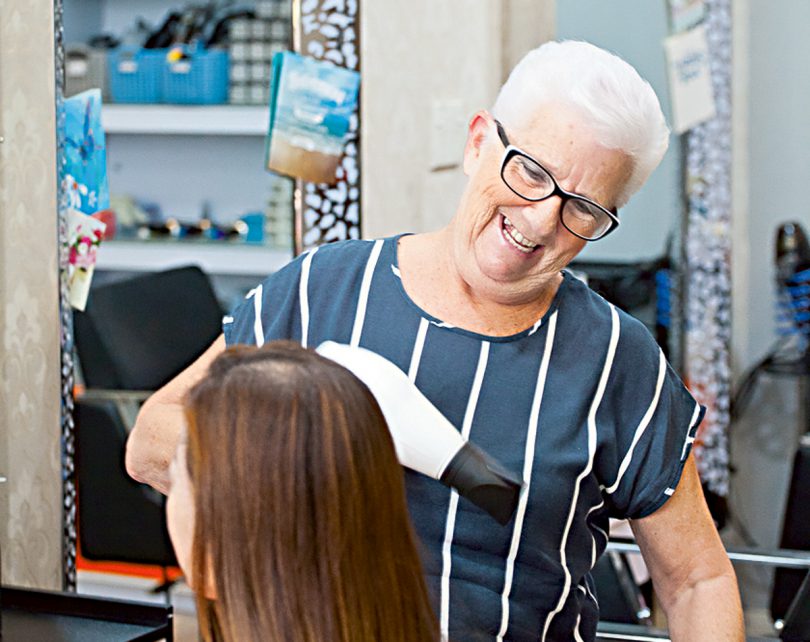 WHEN Campsie’s Christine Smith first started out as a hairdresser at the age of 15 in 1966, it was all about beehives and French rolls – now as she retires at 68, the fashion includes long, straightened hair, dark roots and freehand highlights as with the Balayage, two-toned look.

“I’ve seen all the hair fashions come and go and then come back again,” says Chris, adding that ‘The Bob’ cut was making a comeback.

“There used to be lots of sets and perms, which I still do, but requests for these styles are certainly dwindling.”

Training in the UK and then first working in Leichhardt when she came to Sydney, it wasn’t long before Chris had moved to Mark Ambrose Hair in Campsie where she has stayed since 1983.

“The salon was then bought by Edward Winter and known as Edwards and when I bought the salon in 2004, I kept the name,” she explained.

She recently sold it to new owners, who have changed the name to Junus, but kept working there until she finished up on March 21.

Chris and husband Ken are planning a retirement seachange to Tamworth along with one of the their two sons Gary and Andrew.

“I have enjoyed every minute of working in Campsie and will miss my customers,” she said.

“We know each other’s lives and have been through so much together.

“I would like to thank them all for their loyalty and friendship over the years.

“They have all been so fantastic and even threw me a little send off at Club Belmore.”