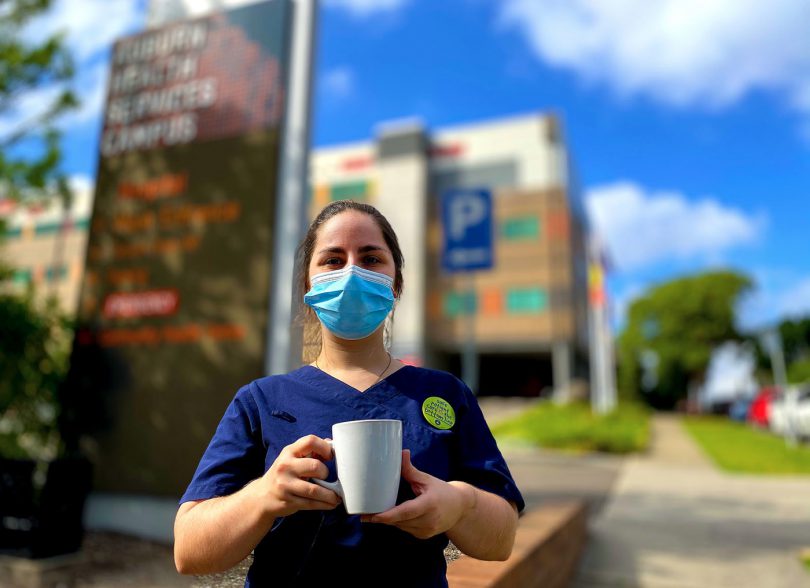 FRUSTRATED nurses – like Lisa Phillips – and midwives at Auburn Hospital say the tiny pay rise granted this month was “a big slap in the face” and not even enough for a cup of coffee a week.

FRUSTRATED nurses and midwives at Auburn Hospital say the tiny pay rise granted this month is not even enough for a cup of coffee a week.
On October 1, the NSW Industrial Relations Commission (IRC) awarded a 0.3 per cent increase in the public sector wages case, rather than the 2.5 per cent rise sought by the NSW Nurses and Midwives’ Association (NSWNMA) alongside other unions and previously promised by the Government.
Vice president of the NSWNMA’s Auburn Hospital branch, Audrey Figues, said members she had spoken to described it as “a big slap in the face”.
“It’s one thing to say how wonderful we are being on the frontline of a health crisis and how much they value our service but to turn around and do this is just an insult,” she said.
“Of course we are glad we still have jobs, but we still want to feel valued.
“Our cost of living is going up but our wages are doing nothing.”
Miss Figues added that hospitals were short staffed with people already doing extra unpaid work even before Covid hit.
“People are really feeling stressed out by the whole situation,” she said.
“It can make you think why did I even get into this job, but then you know you are there for the patients.”
However NSW Treasurer Dominic Perrottet said the decision supported the Government’s intention to prioritise job-creation to reignite the economy.
“Our economy needs stimulus, we need to make every dollar count and the best modelling and advice is that we will get more bang for buck through direct investment, not higher pay packets for public servants,” he said.