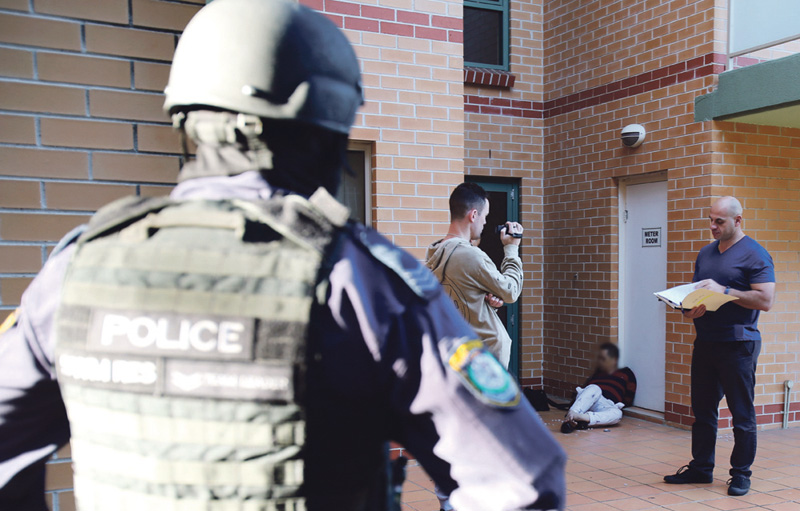 A MAN who allegedly tried to flee when police raided a property in Wiley Park was arrested after being chased down by officers.

He was one of six people charged after police raided 12 homes, including two at Wiley and Kingsgrove, in a crackdown on the manufacture and supply of illicit drugs, primarily methylamphetamine, across the greater Sydney area.
During the searches, police allegedly seized equipment and chemicals consistent with drug manufacture, electronic equipment, various documentation, mobile phones, more than $50,000 cash, cocaine, ice, MDMA, prescription medication and three clandestine drug laboratories, one of them at the Kingsgrove property.
Upon entry to the Wiley Park unit, officers located two men residing in the garage of the property, while a third man, aged 53, attempted to flee but was arrested.
The two men located in the garage were spoken to by police and released pending further inquiries.
The 53-year-old man was charged with manufacture large commercial quantity prohibited drug, two counts of commercial drug supply, two counts of organises/conducts/assists drug premises, two counts of owner/occupier knowingly allow use as drug premises, two counts of found on/entering/leaving drug premises, two counts of possess prohibited drug, drive motor vehicle during disqualification period, and participate in a criminal group contribute criminal activity.
Another five people arrested during the raids face various drugs charges.
Surry Hills Region Enforcement Squad Commander, Detective Chief Inspector Steve Patton, said the raids were the culmination of 10 months of police investigations.
“Strike Force Pickle detectives have been investigating the activities of this alleged drug syndicate for almost a year, and the arrests are a direct result of their dedication and hard work,” Det Ch Insp Patton said.
He says the community can assist police by being vigilant as to what is happening in their suburbs and reporting any suspicious behaviour to police.
Anyone with information about the manufacture and supply of prohibited drugs, is urged to contact Crime Stoppers, 1800 333 000 or nsw.crimestoppers.com.au. Information is treated in strict confidence.