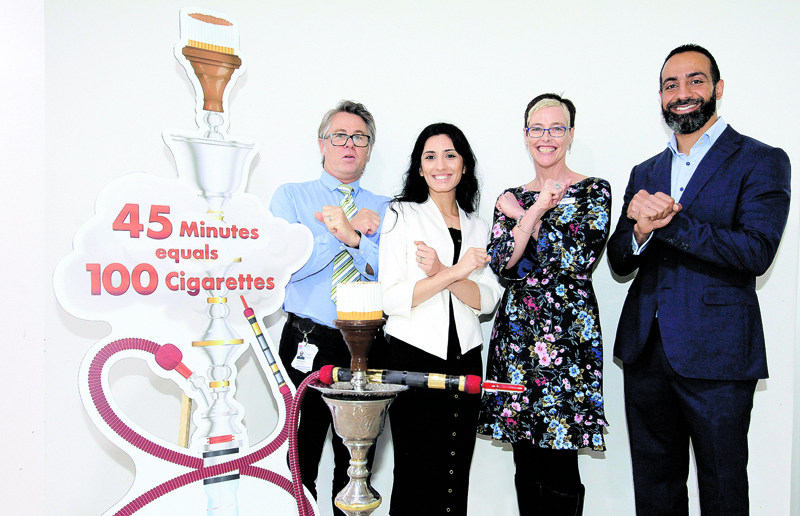 URGING shisha smokers to quit an unhealthy habit, Tony Jackson, Dr Dalya Karezi, Lisa Woodland and Ahmad Malas at this week’s launch of the ‘Shisha No Thanks’ campaign at the Lebanese Muslim Association at Lakemba.

A CAMPAIGN to raise awareness in multicultural communities about the harms of shisha smoking, was launched at the Lebanese Muslim Association at Lakemba on Tuesday afternoon.
Shisha is a waterpipe or hookah through which people can smoke a mixture of tobacco and flavourings or molasses sugar and while many users believe it isn’t as harmful as smoking cigarettes, health authorities say 45-minutes of smoking shisha equals about 100 cigarettes.
Also contrary to what many people believe, the fruit flavourings simply mask the tobacco toxins which are not filtered out by the water.
The Multicultural Health Service of the South Eastern Sydney Local Health District, was awarded a $386,000 grant from the Cancer Institute NSW to lead the community-based ‘Shisha No Thanks’, project in partnership with the Lebanese Muslim Association.
It will focus on making young people from the Arabic speaking community, including their friends, family and networks, aware of the harms of shisha.
For assistance to quit smoking, call the Quitline on 137 848 or the Arabic Quitline on 1300 7848 03.