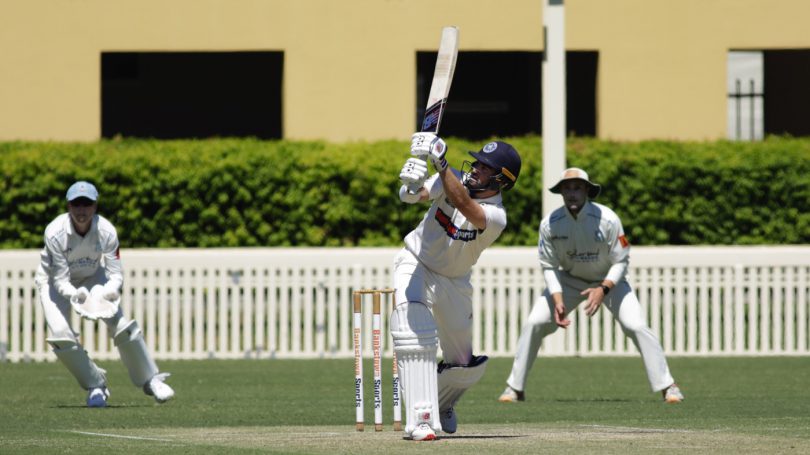 BANKSTOWN opener Nick Carruthers (pictured) is renowned for his explosive batting but his 112 against the Sharks was a classic and polished performance. The accomplished left hander’s magnificent knock laid the foundation for a first grade victory against the circling Sharks.

THE Bankstown Sports Bulldogs narrowly defeated the Sharks in a thriller at the picturesque Memorial Oval last Saturday.
Bankstown eventually wound up the Sutherland innings for 294, with former Bulldog Tushaar Garg providing stubborn resistance with 33 not out. Paceman Liam Marshall snared the last wicket to set off the Bulldogs’ run chase.
Opener Nick Carruthers hammered 13 sparkling boundaries and three superb sixes with one powerful pull shot soaring high over the square leg fence as he asserted his authority, while fellow opener Zeeshaan Ahmed unleashed some elegant drives and punishing square cuts as the pair added a stunning 143 opening stand.
Ahmed scored 7 sparkling boundaries in a stylish 49 and looks set for a great season.
Sydney Thunder and NSW Blues all-rounder Nathan McAndrew chimed in with a very valuable 37. The sign of a true all-rounder is that they can hold their place in the side with bat or ball and this is one of McAndrew’s strengths and is a vital cog in the Bulldogs wheel.
The lanky all-rounder followed a concerted bowling effort. His innings ensured the Bulldogs kept on barking as they chased down the sizeable target.
Daniel Nicotra showed he was just the man for the task and batted with the aplomb of a veteran relishing the pressure in his stoic 38. A lower order collapse gave the Sharks hope, but all-rounder Ben Le Bas and paceman Liam Marshall got the Dogs across the line. It was a defiant 26 not out from the versatile all-rounder and star fieldsman Le Bas. He was cool, calm and calculating as he guided Bankstown to victory and six precious competition points. It was a very close and thrilling finish and the bonus for Doggies supporters came from the play streamed live on the Clubs Facebook page. Cricket fans were able to watch the match live courtesy of Life Member and volunteer extraordinaire David Clifton on the Bulldogs website and Facebook page, with older fans marvelling at the technology. Loyal supporters are looking forward to the next couple of Saturdays when the Doggies take on reigning premiers Randwick-Petersham. Play will commence on 10.30am on both days.
The Bulldogs completed a wonderful weekend with a Twenty20 victory over Campbelltown Ghosts on Sunday afternoon.
Bankstown batted first and posted a competitive 8-165. The Ghosts finished with 6-144 and the Doggies were home.