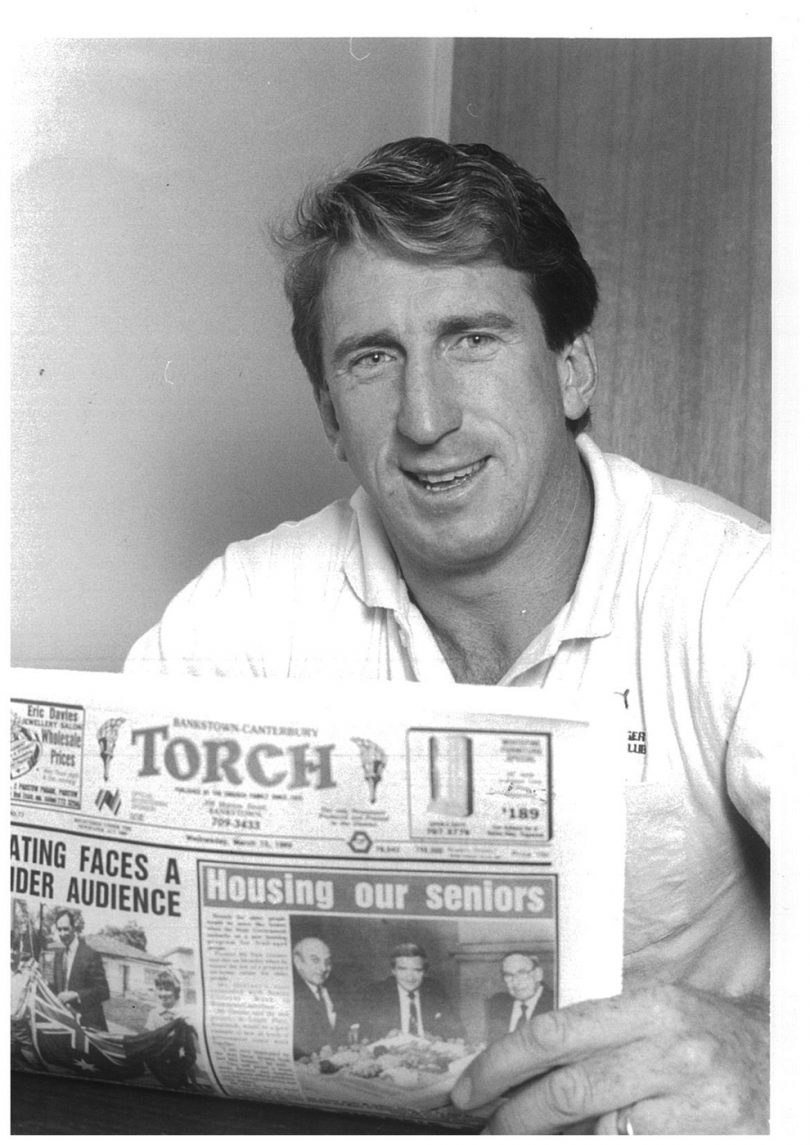 AS a country boy who had been playing rugby league in Wagga Wagga until he was spotted by Bulldogs great Peter Moore and offered a move to Canterbury at 19, Steve Mortimer was a bit wary of his first interview with then Torch editor Phil Engisch.

“I didn’t know what to expect but he always treated me very fairly,” Steve said.
Playing 275 first grade games – two years with the Berries and 11 years with the Bulldogs, Steve’s team played and won three grand finals and was runner-up in 1986.
“That was the last game I played and the Torch was always there in the background and has been wonderful not only to myself but dozens and dozens of sportsmen and women,” the former Canterbury Bankstown Bulldogs CEO said.
“The thing that makes the paper stand out from the rest, then and now, are its close ties with the community.
“The family owners and staff can be very proud of the opportunities that they’ve created and the achievements of community members that they have promoted.”
Steve congratulated the Torch on reaching its 100-year anniversary.
“Let’s hope there’s another 100 years to come,” he said.
Assistant coach for the Australian Rugby League team and former assistant coach of the Queensland Origin side, Michael Hagan, has come a long way since moving from Brisbane at 18 to take up an offer with the Canterbury Bulldogs and a journalism cadetship with the Torch.
The former Newcastle Knights captain, premiership winning coach and the club’s first director of football, fondly remembers his time as a journalist with the Torch and says to this day, he is grateful for the experience it gave him.
Spending six years working at the Torch under Phil and John Engisch, Michael said in those days all the players either worked or studied because the idea was you had to have something behind you.
“Phil and John were both great mentors for me; they gave me good discipline – you had to turn up for work on time, train after hours, play on Sunday and back at work Monday morning; I can still spell well and have Phil to thank for that,” he said.
“I think because of them, I’ve got a better appreciation of my opportunities.
“I still have a media role with Triple M in Newcastle so the journalism training has served me well.
“I also met some great people while working there that I’m still in touch with.”
Michael said he would like to congratulate the Torch on reaching it 100th anniversary.
“It’s a remarkable and a rare achievement for an independent newspaper group to still be family owned, doing a great job in the community and going strong after a century,” he added.