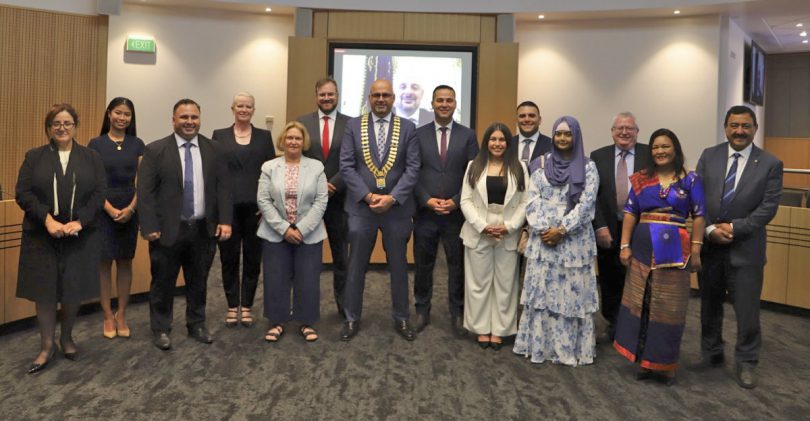 SEVEN new councillors including the first Nepal-born woman to run for public office in Australia, have been elected to Canterbury Bankstown Council.

The makeup of the council consists of nine Labor, five Liberals and one Independent.
Late last month newly elected councillors took the oath and swore affirmations, during a colourful ceremony attended by family and friends. They then proceeded to the Council Chambers for their first meeting where Cr Khal Asfour was elected Mayor and Bilal El-Hayek elected Deputy Mayor.
Vowing to instil a sense of pride throughout the community, Mayor Asfour said he wanted the community to “be proud of living in our City”.
“As Mayor, I intend to continue to build on the great work this council has achieved since amalgamation and to realise its vision of becoming a better, smarter City,” he said.
“This term of the council will be one of the most important terms, as the City undergoes some major changes.
“A new university is being built, potentially a new hospital and TAFE, the arrival of the Metro and the massive investment being planned in our major town centres.”
Canterbury Bankstown’s newly elected councillors are: Bankstown Ward, Darani (Ghost Gum) – Khal Asfour (ALP) Mayor, Bilal El-Hayek (ALP) Deputy Mayor, George Zakhia (LIB); Bass Hill Ward, Burra (Kangaroo) – Christopher Cahill (ALP), Rachelle Harika (ALP), Charlie Ishac (LIB); Canterbury Ward, Budjar (Paperbark) – Barbara Coorey (IND), Jessie Nguyen (LIB), Clare Raffan (ALP); Revesby Ward, Bunya (Tea Tree) – Charbel Abouraad (LIB), Linda Downey (ALP), David Walsh (ALP); and Roselands Ward, Bunmarra (Blue Tongue Lizard) – Sazeda Akter (LIB), Karl Saleh (ALP), Bhadra Waiba (ALP).
The Mayor said the election of Cr Waiba was “an outstanding achievement and an affirmation for multiculturalism in this country”.
Cr Saleh thanked residents for “entrusting me and my Labor team colleague, Bhadra Waiba, to be their voice in council”.
“I’ll work for you, and always have you front and centre of my mind during every decision I make to ensure you will not be let down nor left out again from receiving the fair share of council projects, resources, services and leadership,” he said.