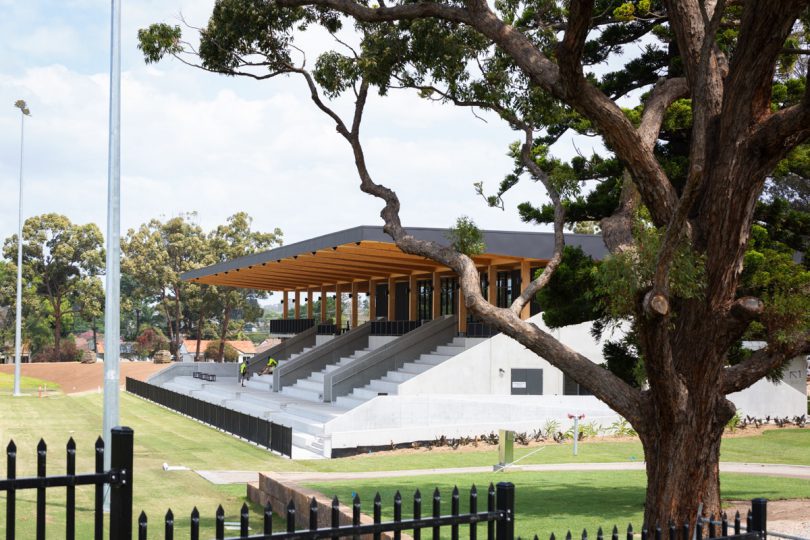 WESTERN Sydney’s new home for sport will be opened later this month.

The $11.3 million state-of-the-art Eric Tweedale Stadium will be officially opened on Friday, November 19, with a plaque unveiling to be attended by several special guests including the man who the stadium was named after, Eric Tweedale (former Wallaby and oldest living Wallaby player), Mahalia Murphy (Two Blues and Wallaroos Player), Pauline Piliae (Two Blues and Wallaroos Player) and Adrian Skeggs (Former Wallaby).
Cumberland Mayor Steve Christou said the stadium had been a benchmark for sustainable construction with a key focus on an intricately detailed timbre roof structure which would be lit up for an evening of sport, food and community.
“We’re delighted to make Granville home to community sport and provide our residents and visitors with a revitalised facility,” he said.
“Its unique design is commendable, with the roof blending into the existing tree canopy and opening onto the new pitch.”
In March last year, Cumberland City Council unanimously voted to name the Granville Park Community Sports Pavilion, ‘The Eric Tweedale Stadium’.
Mr Tweedale’s contribution to the game has been instrumental in the development of the local team, Two Blues.
General Manager of the Two Blues, Christian Burden, says the new stadium presents a real opportunity to inspire the new generation of rugby players.
“The Eric Tweedale Stadium has provided the Two Blues with a wonderful opportunity to embark on the next chapter of their long and proud history,” he said.
“We now have a real opportunity to generate new levels of interest and excitement from the local community.”