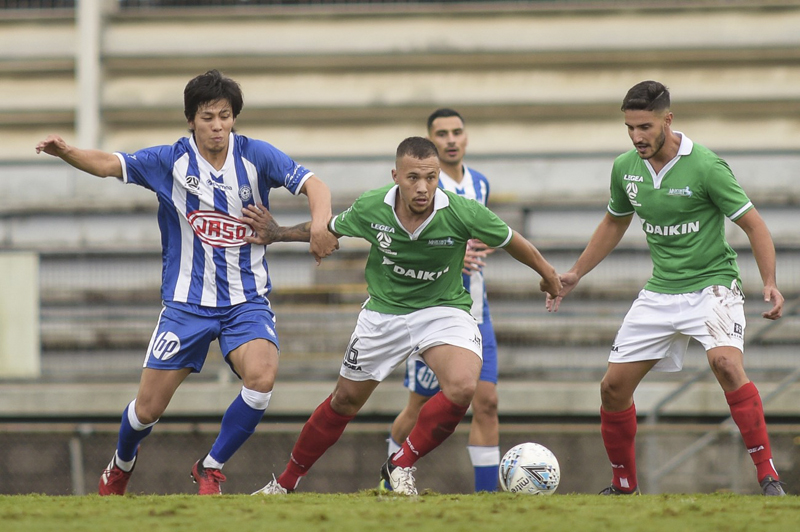 IN a sensational finish to the last round of the competition, the Bankstown Sports Bulldogs sunk the Sharks at Glenn McGrath Oval.

Bankstown surpassed expectations this year especially with the prestigious Sydney Grade Club Championship. Players and supporters can now look forward to the finals with keen anticipation.
All three top grades have progressed to the play-off games which is a magnificent effort and a unique achievement.
Coach Gary Crowfoot can take a lot of the credit with his expertise and very dedicated work on all facets of the game.
The locals completed the intriguing season with a sensational victory last Saturday. All the other first grade games were affected by the persistent rain with only three games achieving a result.
The Bulldogs batted first and ripped into the Sharks with 2-156 off 30 overs when rain intervened.
Run machine Nick Carruthers exploded into action once again with a free flowing 50 plundering 8 awesome boundaries and a superb 6 which sunk the Sharks and their hopes of early wickets. His spectacular knock took just 56 minutes and got the Bulldogs barking vociferously. Allrounder Mitch Brown savaged his old side with a dynamic 50 in a quick-fire innings which entertained the crowd for 70 minutes. Brown is a formidable allrounder and aggression personified.
The Bankstown innings was rounded off with yet another top notch knock from NSW Blues player Daniel Solway who earlier this season made a stunning debut century to start his first-class career. It rescued the Blues who were in dire straits against the Redbacks at the time.
Last Saturday the resolute opener was unconquered on 36. Spinner Ben Le Bas made immediate inroads in the Sutherland top order removing both opening batsmen. His 4-29 set up victory as the Bulldogs circled the Sharks and cruised into the finals.
Liam Marshall is having a tremendous impact at the moment and charged in belligerently with 3-23. Mitch Brown and Ben Taylor captured a wicket apiece while Daniel Nicotra showed his versatility with 1-1 off just two deliveries.
The Bulldogs finished in third place guaranteeing a home ground Qualifying Final advantage.