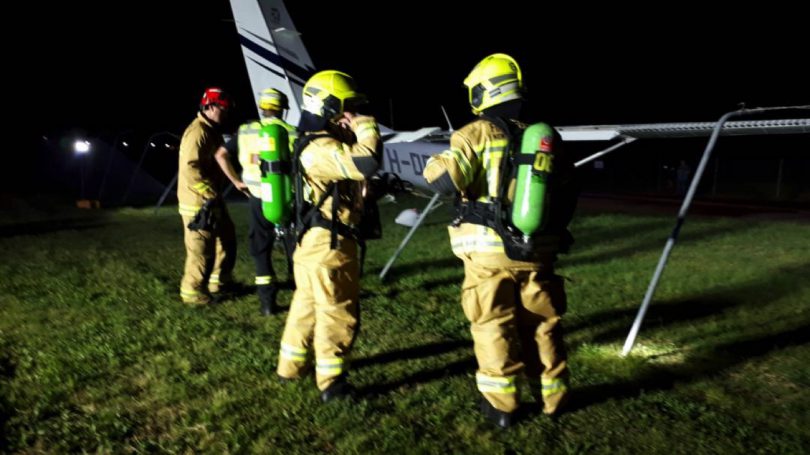 ONE person suffered minor injuries when a light plane overshot the runway and crashed at Bankstown Airport last Friday night. When emergency crews arrived about 7pm, they found the passenger still in the plane while the pilot had escaped without injury.

Police were called to the service station on Canterbury Road about 3am and were told the armed man threatened an employee before leaving with a sum of money.
He was last seen running towards King Georges Road.
The 21-year-old employee was uninjured.
Police would like to speak to a man who may be able to assist with inquiries. He is described as being as being 175cm to 180cm tall, of a large build, wearing a blue, white and black hoodie, black trackpants and white sneakers.

Hunt for woman in brawl
POLICE are appealing for help locate a woman and vehicle following a domestic related incident in Revesby on Saturday afternoon.
Just after 2.30pm, police were called to a home on Lochinvar Road, Revesby, after reports of a domestic dispute.
Police have been told a Ford Focus was driven into the backyard of the home and deliberately at a 22-year-old man and a 21-year-old woman.
The pair moved to avoid the vehicle, however, the woman was struck on the legs causing significant foot injuries.
Following an argument and a physical struggle with the uninjured man, the female driver – known to the pair – fled, hitting a fence.
The injured woman was treated by paramedics before being taken to hospital in a stable condition.
Bankstown Police are investigating but are yet to locate the female driver or the vehicle.
The woman is described as being of Caucasian appearance, about 165cm to 170cm tall, of a thin build, and with long blonde hair.
She resides in the Chester Hill area, however, her current whereabouts are unknown and is believed to be in company of a two-month-old child and travelling in a 2004 red Ford Focus sedan, with NSW registration CX-05-AX.
Police are appealing for anyone who sees the vehicle or with information on the woman or child’s whereabouts, to contact Bankstown detectives or Triple Zero (000).

Drunk learner speeding
AN unaccompanied learner driver from Revesby has been charged with high-range drink-driving.
Just after 11.30pm on Friday, police were conducting speed enforcement duties on Fairford Road at Padstow, when they allegedly detected a Toyota Hilux utility allegedly travelling 95km/h in a 70km/h zone.
Officers stopped the vehicle and spoke with the driver, a 26-year-old man, who produced a learner driver licence.
The man underwent a roadside breath test, which allegedly returned a positive result. He was also searched, where police seized drug paraphernalia with a white substance.
The 26-year-old man was charged with driving with high-range PCA, learner unaccompanied, exceeding speed more than 20km/h, and possessing a prohibited drug.