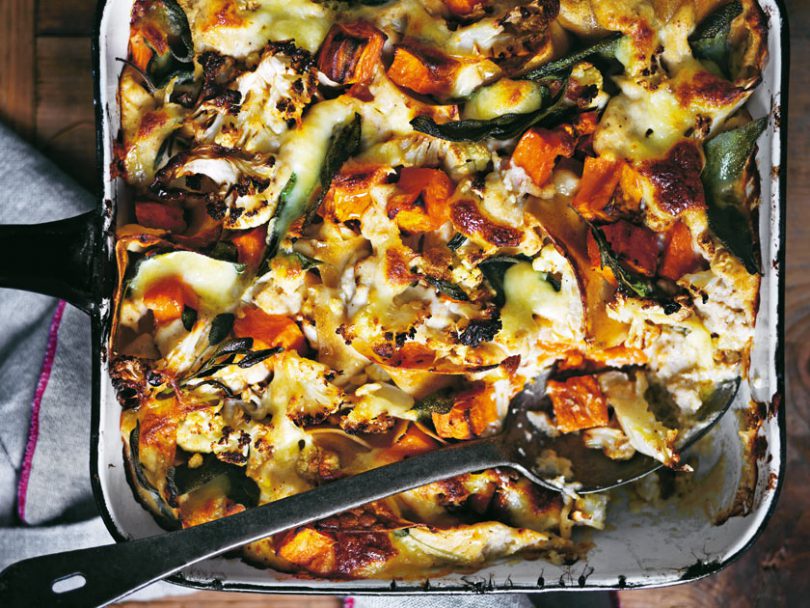 Method
Preheat oven to 200C (400F). Place the sweet potato, garlic, salt, pepper and half the oil on a large oven tray. Toss to combine. Place the cauliflower, sage, salt, pepper and remaining oil on a separate large oven tray and toss to combine. Place both trays in the oven and cook for 30 minutes or until the sweet potato and cauliflower are golden and tender.
Place 2 cups of the cauliflower in a large bowl. Slice off the top of the garlic and squeeze the cloves into the bowl. Add the parmesan, milk and salt and, using a hand-held blender, blend until smooth and creamy.
Cook the lasagne sheets in a large saucepan of salted boiling water for 4–5 minutes or until partially cooked. Set aside.
Layer the lasagne sheets with the sweet potato, cauliflower and cauliflower bechamel in an 8-cup-capacity (2 litre) baking dish, repeating the layers until all the ingredients are used. Top with the mozzarella. Place the dish on an oven tray and cook for 30 minutes or until golden and cooked through. Serve.