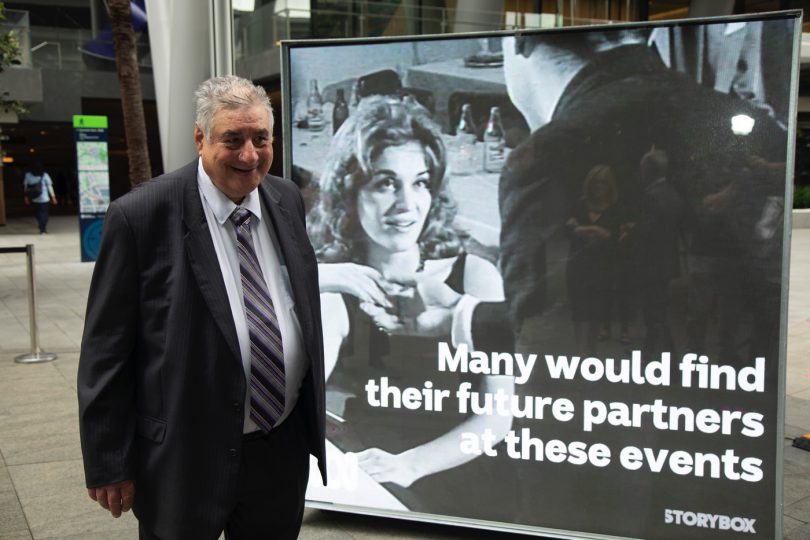 SILVERWATER resident Len Norman got a taste of celebrity at the launch of the City of Parramatta’s 3D Storybox on Wednesday.

He was invited after recognising himself as a 19-year-old in archival footage featured as part of Storybox which was shot by the ABC in 1963 at a dance organised by the Lebanese Kfarsghab community at the former Cedars of Lebanon Hall in Parramatta.
While admitting to being a little overwhelmed by all the attention, he described the Storybox concept as “magnificent”.
“Even though I knew the footage was coming out, it was quite emotional,” he said.
“The hall was a meeting point for us. We went there at least once a month. You can imagine how thrilled we were to find this footage.
“I was amused because they highlighted me with a white circle in the footage. I was being a bit of a wallflower, I wasn’t dancing at the time.”
Located in Parramatta Square, the two-metre multimedia solar-powered cube uses high-resolution LED panels to stream visual stories created by the community and footage from the ABC Archives, and Mayor Bob Dwyer says it invites people to think “outside the box about Parramatta”.
The installation also features an interactive ‘Mood Ring’ that uses a QR code to gauge how people are feeling and changes colour correspondingly.