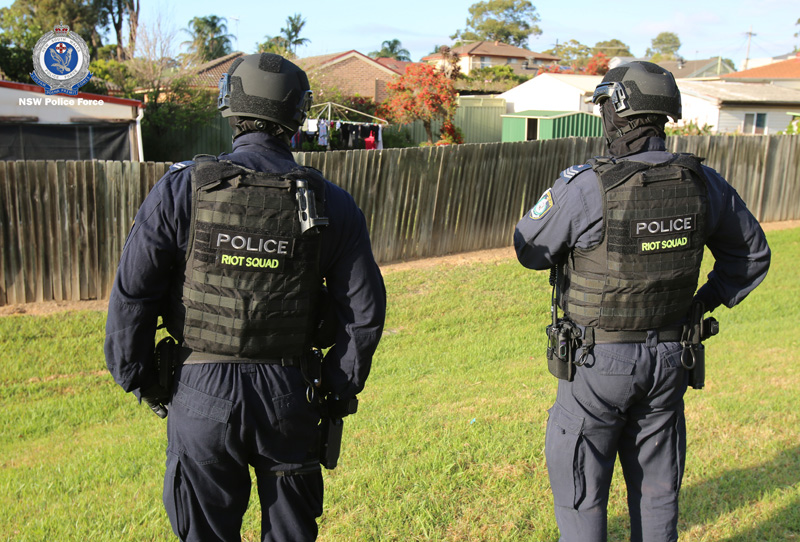 A HOME in Panania was raided by police this morning as part of a high-impact operation targeting the illicit activities of an outlaw motorcycle gang (OMCG) across the Sydney Metropolitan area.

As part of ongoing targeting of criminal networks operating in NSW, the Criminal Groups Squad’s Strike Force Raptor established Strike Force Ares to investigate the illicit activities of the Finks OMCG and their associates.
Following inquiries, Strike Force Raptor, assisted by officers from Central, North West, and South West Metropolitan Region Enforcement Squads, various Police Area Commands, the Public Order and Riot Squad, and the Dog Unit, executed 22 criminal organisation search warrants at homes across Sydney from 6am today (Wednesday, October 23).
During the searches, police have allegedly seized a number of items relevant to their ongoing investigation including Finks OMCG colours and paraphernalia, clothing, documentation, electronic storage devices, mobile phones, prohibited weapons, illicit drugs, drug paraphernalia, and restricted substances, including steroids.
While police were at a home at Shalvey, it’s alleged that the 27-year-old male allegedly resident drove in a dangerous manner on approach to the property.
He was issued a Field Court Attendance Notice for drive recklessly/furiously or speed/manner dangerous, Class A motor vehicle exceed speed more than 10 km/h (estimated), and negligent driving.
He is due to appear at Mt Druitt Local Court on Wednesday, November 20.
Officers also issued defect notices to a number of vehicles parked at the Shalvey home.
Two men – aged 27 and 40 – and a 25-year-old woman were arrested for unrelated matters during the operation.
A 40-year-old Edmondson Park man was charged with reckless wounding and affray, which relate to an alleged glassing at Pyrmont on Sunday 12 May 2019.
After officers allegedly located alprostadil, which was not prescribed to him, and cannabis during the search of the Edmonson Park home, he was also charged with possess prohibited drug and possess prescribed restricted substance.
He was refused bail to appear at Liverpool Local Court today.
The 25-year-old Rydalmere woman was charged with two outstanding warrants for Domestic-violence related incidents.
She was refused bail to appear at Parramatta Local Court today.
The 27-year-old Riverstone man was charged with contravene prohibition/restriction in AVO (domestic).
He was granted strict conditional bail and is due to appear at Blacktown Local Court next Wednesday (October 30).
Investigations under Strike Force Ares are ongoing.
Strike Force Raptor was established in 2009 and conducts proactive investigations and intelligence-based, high-impact policing operations to prevent and disrupt conflicts, and dismantle any network engaged in serious organised criminal activity.
Anyone with information, including relevant photos and videos, that may assist Strike Force Raptor can report it directly to investigators via the Strike Force Raptor online reporting page: https://www1.police.nsw.gov.au/Default.aspx?id=49 or call Crime Stoppers on 1800 333 000.
Information provided to investigators will be treated in the strictest of confidence.