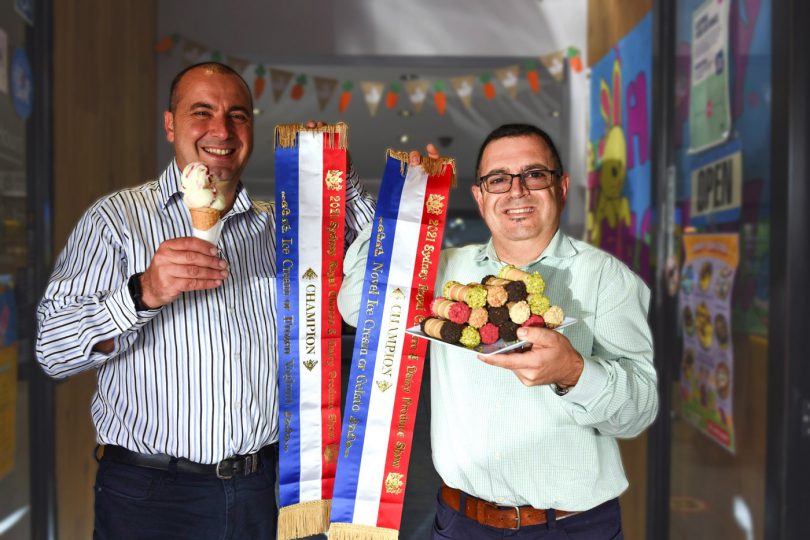 WELL on the way to realising their vision of being the finest gelato manufacturer in the country, Croydon Park’s Pure Gelato has added two more championship wins to their long list of awards.

Joe Di Maria and brother-in-law Alfredo La Cava have won Champion Ice Cream or Frozen Yogurt for their strawberry yoghurt ripple and Champion Novel Ice Cream or Gelato for their gelato-filled wafer cannoli at the 2021 Sydney Royal Cheese & Dairy Produce Show.
Alfredo said it was wonderful to get two more championship wins after being named Australian Grand Dairy Champion for their salted pistachio gelato in 2018.
The beginnings of Pure Gelato originated decades ago, with four-year-old Joe accompanying Papa Di Maria, one of Australia’s early gelato pioneers who, via his old-fashioned ice-cream van, would sell homemade ice-cream similar to Mr Whippy.
Alfredo said Joe’s fascination with ice-cream continued and in his late teens, he packed his bags and headed to Italy with a mission – to study the fine art of gelato making and in no other place but the land of its origin.
“Joe returned to Australia to start his own company, Pure Gelato, and we joined forces,” Alfredo said.
“Then in 1998 our efforts paid off when at the Royal Easter Show that year, Pure Gelato’s hazelnut gelato was awarded a gold medal.
“There have been numerous awards since that time as we are passionate about perfecting what we do and are thrilled to receive this recognition.”