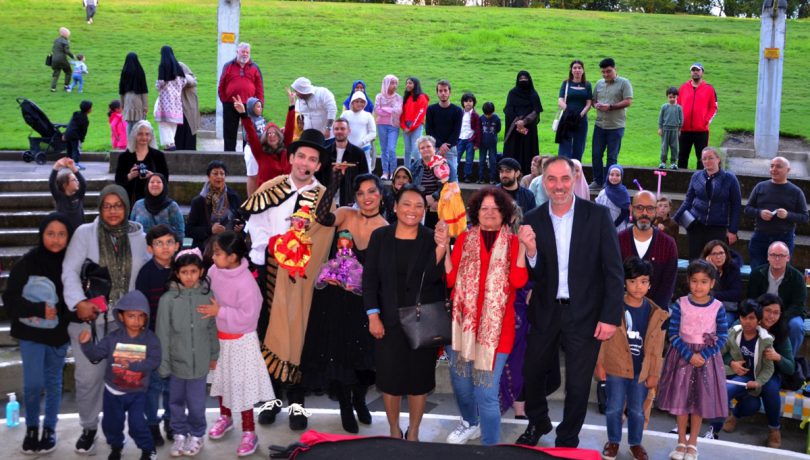 STATE MP for Lakemba, Jihad Dib, was among those congratulating Horizon Theatre founder and master puppeteer Maddy Slabacu and her performers as they celebrated their 25th anniversary with an exciting free show as part of their Sharing Culture Festival.

Festivities included a screening of the film version of ‘Feathers of Fire’, a dazzling digital version of the Middle Eastern shadow puppet play based on the Persian epic, ‘Shahnameh’.
There was also a host of live performers mingling with families and puppet videos from around the world screening as well as food and drink stalls.
“The festival gives us an opportunity to promote art and local artists,” Ms Slabacu said.
“It’s something we’ve done for a quarter of a century and we only want to move from strength to strength.
“With the arrival of joint Artistic Director Shabnam Tavakol, the theatre plans to continue well into the future.”
The festival involved local artists including Ben Kuryo, Ruby Dollin, Emilia Stubbs Grigoriou, Ebony Halliday, Stathis Messaris and Lachlan McInnis.
Mr Dib praised the leadership of Ms Slabacu whom, he said, had demonstrated the value of a theatre in the park as a great community asset.
He also talked about the theatre being internationally awarded and how that brought credit to the community.
“I would like to see this theatre in the park used much more and promoted as an important facility for the whole community to enjoy,” he said.