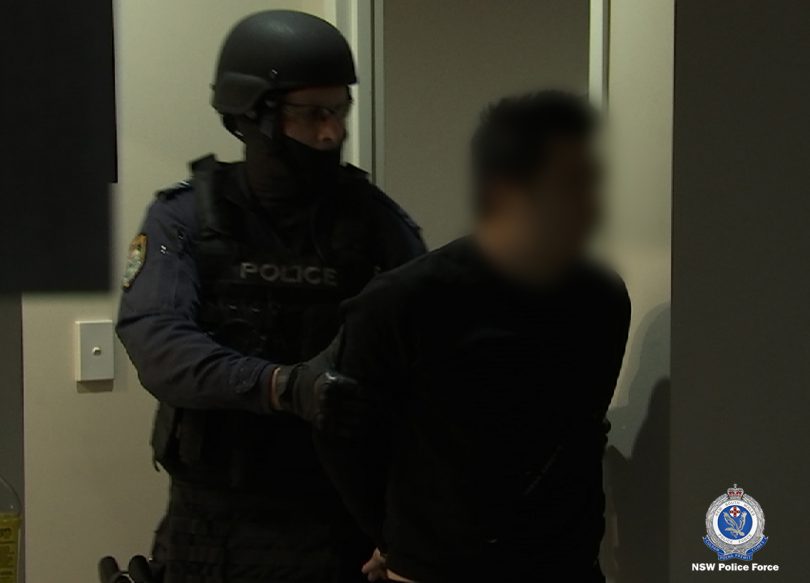 A 26-year-old man arrested at a property in Yagoona faces several charges.

A man arrested in Yagoona today is the latest person charged over his alleged role in a Sydney-based organised crime syndicate.

In July 2019, the State Crime Command’s Organised Crime Squad and the NSW Crime Commission established Strike Force Riche to investigate a criminal syndicate involved in cannabis cultivation and money laundering.
Their inquiries uncovered a network operating multiple hydro houses in residential areas across Sydney’s south west, and it will be alleged in court that the syndicate cultivated and supplied large commercial quantities of cannabis in NSW and interstate.
As a result of investigations, police charged 11 people and seized $3 million worth of prohibited drugs between December 2019 and March 2020.
Following extensive inquiries, strike force detectives, assisted by officers attached to Bass Hill Regional Enforcement Squad, executed a search warrant at a unit at Yagoona about 6.45am (Tuesday, May 19).
During the search, investigators seized cash, which is alleged to be the proceeds of crime.
A 26-year-old man arrested at the property was taken to Bankstown Police Station and charged with two counts of supply prohibited drug large commercial quantity, two counts of supply prohibited drug commercial quantity, supply prohibited drug indictable quantity, knowingly deal with proceeds of crime, deal with property proceeds of crime and participate criminal group contribute criminal activity.
Police will allege in court that the man was a member of the syndicate and assisted in the coordination of large-scale drug supply.
Investigations under Strike Force Riche are continuing.
Anyone with information that may assist Strike Force Riche investigators is urged to contact Crime Stoppers: 1800 333 000 or https://nsw.crimestoppers.com.au. Information is treated in strict confidence.