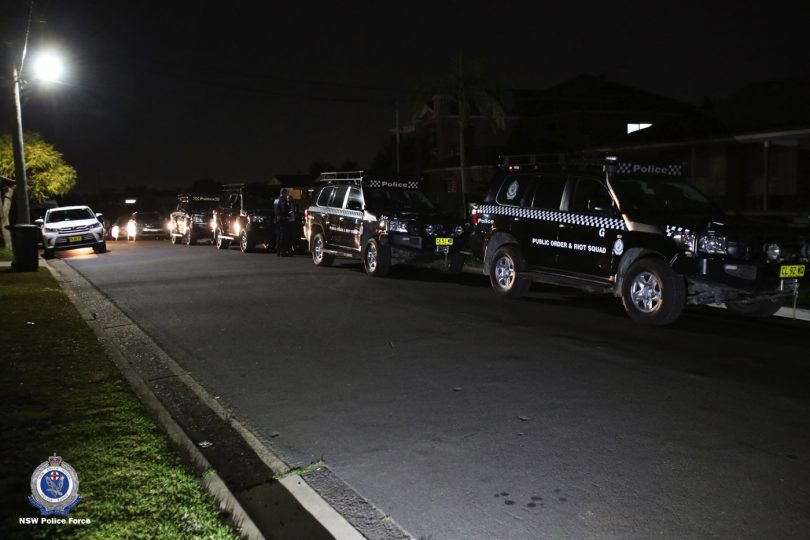 Two men from Bankstown and East Hills were among 25 people charged after police executed searches at 54 properties as part of a high-impact operation targeting firearm-related violence in Sydney’s south-west.

Operation Clampdown was established to investigate public place shootings across the South West Metropolitan Region in August and September 2020.
Since the beginning of August, there have been 12 shootings, including five in public places.
As part of Operation Clampdown, officers from South West Metropolitan Region, assisted by State Crime Command, Operational Support Group, the Public Order and Riot Squad, Traffic and Highway Patrol Command, PolAir, and the Dog Unit, conducted 54 Firearm Prohibition Orders (FPO) searches at properties since the operation began earlier this month. Seven vehicles were also searched.
During the operation, police allegedly located 13 firearms including seven pistols, a homemade firearm, prohibited drugs, cash, an electronic stun device, knives, knuckle dusters, ammunition, a ballistic vest, 380 false credit cards, 101 mobile phones, and OMCG colours.
All items seized during the operation will undergo forensic examination.
Minister for Police and Emergency Services, David Elliott said Operation Clampdown has sent an unequivocal message to the perpetrators of this violence that no-one is above the law.
“Their reckless actions show a flagrant disregard for community safety and this Government will not tolerate this vigilante behaviour,” he said.
Among those charged was a 23-year-old man, who was arrested during a search warrant at a Bankstown home conducted by Campsie detectives last Friday and charged with shoot with intent to murder, assault occasioning actual bodily harm, and breach of bail.
Police will allege in court that the man is one of a group involved in the shooting of a 29-year-old man at Lakemba at Monday, August 31.
He was refused bail until his next court appearance in November.
During a separate FPO search, a 39-year-old man was arrested after weapons and drugs were allegedly located at a home on Blair Avenue, East Hills, last Saturday.
He was charged with two counts of possess prohibited drug, two counts of possess prescribed restricted substance, supply prohibited drug (indictable quantity), supply prohibited drug (small quantity), possess or use a prohibited weapon without permit, use prohibited weapon contrary to prohibition order and goods in personal custody suspected being stolen.
He was refused bail until October 28.
Investigations under Operation Clampdown are continuing.
Police are urging anyone with information that may assist Operation Clampdown detectives to call Crime Stoppers on 1800 333 000 or use the Crime Stoppers online reporting page: nsw.crimestoppers.com.au/
Information you provide will be treated in the strictest of confidence.