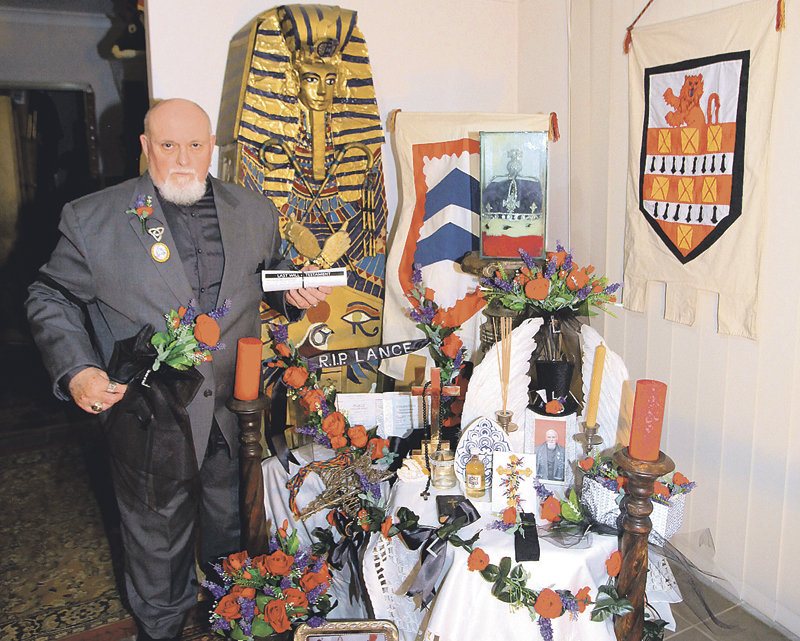 PLANNING to go out in style … and when he’s ready to, Greenacre milliner Lance Tyrrell is in the throes of organising his own euthanasia (voluntary assisted dying or VAD) and a spectacular funeral.

He doesn’t have his appointment date with death yet though, which is being organised through a Melbourne clinic, and has been putting a lot of energy into lobbying the state and federal governments to make euthanasia legal across the country.
“That’s for others like myself so when they wish to go, can do so in their own way and with dignity,” he explained.
“The Government must realise we are all living much longer and our ageing population is not being catered for properly.
“Though I’m on a special diet and breathing machine to help with my conditions, I’m on 36 tablets and medications everyday just to keep alive.
“I’m in constant pain, breathing is a struggle and everyday I can feel myself getting weaker; I don’t want to end up a vegetable in a nursing home.
“That said, I am still carrying on with my charity work where I can and consult on radio, TV, newspapers and in the community.”
Mr Tyrrell says he is at peace with himself and has had great fun organising his funeral.
“I had an Egyptian style coffin made when I had my first cancer at 34 and told I was going to die; it even includes my face mask, initially created in plaster and then covered in 24 carat gold. The scenes on the coffin represent me in the afterlife making hats, clothes and jewellery.”
Used as a bookcase at the moment, it is fit for a pharaoh and inlaid with red turquoise, lapis, jade stones and gold leaf.
“Having been told at least six times in my life, to get things in order, I am now an old hand at it,” says Mr Tyrrell, adding that he has planned his funeral service right down to the last minute with flowers – roses, lavender and native heather, black satin arm bands, bows and sashes for the aisles, his elegant outfit, rose-scented red candles, real silver candle holders, the Tyrrell Arms and shield banner, a remembrance film, hymns, readings, music and a special performance by a celebrity singer friend.
“It’s been a release and comforting to plan my own send-off,” he added.

Having been told at least six times in my life to get things in order, I am now an old hand at it – Lance Tyrrell