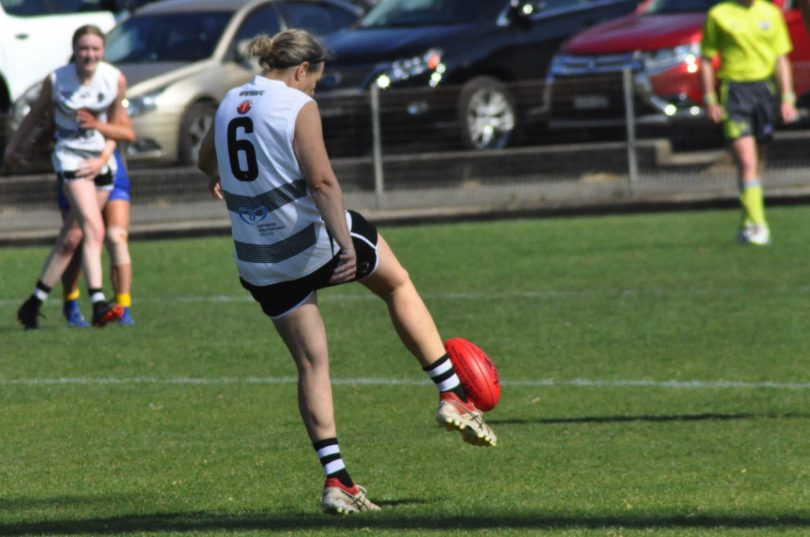 The Inner West Magpies women were ready to celebrate their fearless Captain Melissa Freckelton’s 150th game with a good showing.
And that they did. Elyse Glynn had another superb game in the ruck and gave Freckelton, Belinda Harrison and Erin Todd first use.
Evenly poised at half time, the second half got underway with strict instructions to the Magpies to maintain structure and sustain intensity.
The team soon piled on five unanswered goals to blow the game wide open. The youth girls led by Ella Heads and Maddie Convery, were instrumental, highlighting that the future of the Magpies is bright.
They were supported by Lael Kassem, Rebecca Privitelli, Linda Lodge and Gillian Behan who all showed why they are so well respected.
The highlight of the third quarter was Michaela Ekman kicking a 45m monster goal which got the Magpies soaring.
Special mention must also go to Meredith Montgomerie.
The last quarter saw the Magpies run away with a victory which puts them next in the big dance against the best side all season – Manly.
Inner West Magpies 6.5.41 defeated East Coast Eagles 4.3.27.
It is a remarkable effort noting where the team has been for the last five years and the rebuild that occurred in the off-season, with the team getting better and better every game.
Next Saturday’s 1.45 pm Grand Final game at Kanebridge Oval has limited tickets but will be live-streamed at the Magpie Sports Club, 46 Hampton Street, Croydon Park.