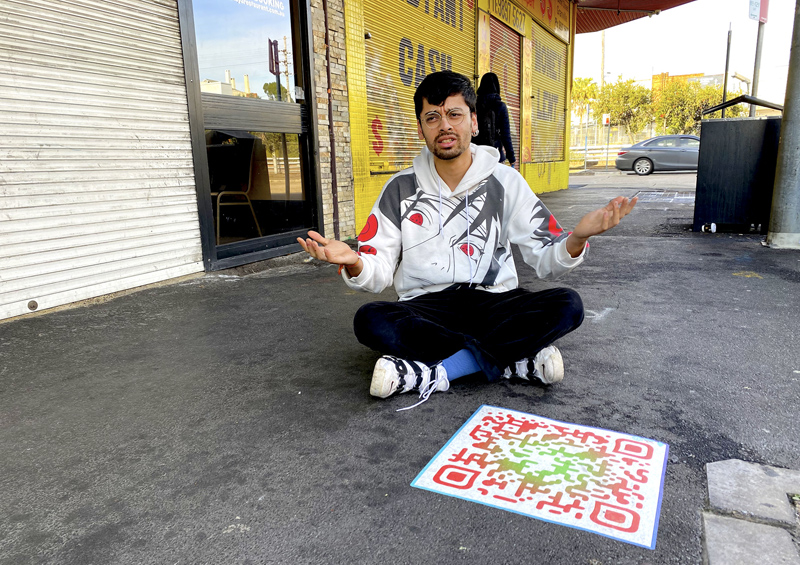 A TEMPORARY footpath artwork had a much shorter showing than anticipated when just days after it was installed near Granville Train Station, it was removed by an unknown ‘art collector’.

Curated by Parramatta Artists’ Studios, and commissioned by the Parramatta City Council as part of its Parramatta By Foot street art project, artist Kalanjay Dhir says he is trying to be flattered by the removal of his printed vinyl piece which he says should be reinstalled in a couple of weeks.
He said the work ‘Immersion: Granville Patch’ was an extension of another similar project also dealing with themes of spirituality and engaging with the natural environment as a settler-migrant.
“I’m really not sure why someone would take it,” he said.
“It was on the ground, sort of like the stickers you have now when you walk into shops to remind you to stay 1.5 metres away from other people,” he said.
“I was really drawn to the material because I first noticed it was being used for advertising at stations like Central and Parramatta.”
The 25-year-old said at first he wondered why anyone would put a billboard or a huge sticker on the ground.
“I thought this is ridiculous,” he said.
“Then I realised it’s because all of us are on our phones so much, we are all looking down all the time.
“That’s the other reason I was really drawn to this project, because I think there’s something a lot to be said about floors, and how much we’re focused on them now.”
Footpath art installations by other artists Nadia Odlum, Penelope Cain, Leanne Tobin and Jason Wing as part of the project, are also now on show around Parramatta’s Rosehill Ward.