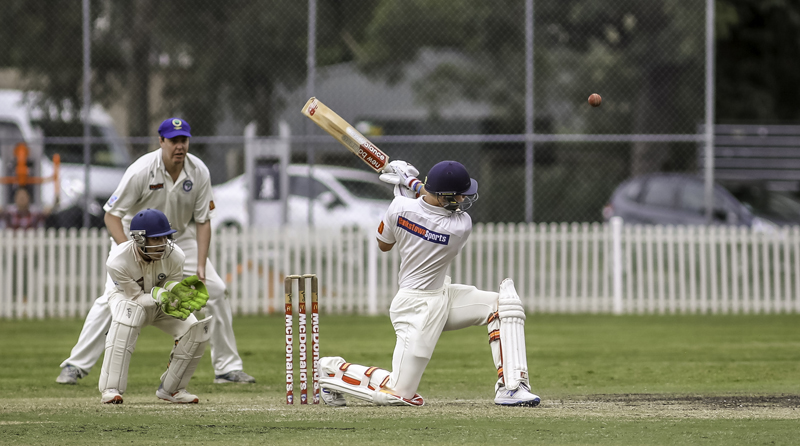 A MAGNIFICENT century from all-rounder Nathan McAndrew ensured Bankstown were in a solid position at 9/295 against Northern District at Mark Taylor Oval.

After winning the toss Bulldogs first grade skipper Daniel Solway elected to bat but the visitors were unable to take full advantage of the conditions slumping to 3/52 with Solway (11), Nick Carruthers (7) and Jake Fawcett (7) back in the sheds. Peter Dignam rode out this difficult period, but when adjudged LBW for a patient 21 off 126 deliveries, the visitors were in trouble at 4/77 and needing someone to stand up and rescue the innings.
Enter Nathan McAndrew and Ben Taylor who produced a record breaking fifth wicket partnership of 189 to take the Bulldogs to 5/266 before McAndrew became the second of Tom Felton’s LBW victims, dismissed for a magnificent 109 off 153 balls including 16 fours.

McAndrew and Taylor now hold the Club’s First Grade fifth Wicket Partnership Record surpassing the score of 177 set in 2015 against Blacktown by Philip Wells and Michael Stretton.
McAndrew was recently selected for the NSW Marsh Cup Limited Overs side and just last week was re-contracted as a member of the Sydney Thunder 2019/20 Big Bash squad. It’s testimony to his character that this committed Bulldog works just as hard for his grade club as he does at representative level.
Equally impressive was 21-year-old Ben Taylor’s innings of 90 off 180 balls including 10 fours and three sixes. Taylor, who hails from the ACT, is in his third season with the Dogs and is a very popular Clubman.
Good judges have long rated Taylor as an outstanding prospect, highlighted by his selection for the Prime Minister’s XI side in 2015 while still a Year 11 student. His classy effort under pressure on Saturday suggests he has the potential to play representative levels as an all-rounder, not just a left arm orthodox spinner.
Endeavouring to push the scoring rate along the Bulldogs lost Jarred Lysaught (4) Ben Le Bas (0) and first grade debutant wicket-keeper Cameron Middleton (2) cheaply leaving young pace duo Liam Marshall (1) and Brad Simpson (2) not out at stumps.
The Bulldogs will be hoping the Marshall and Simpson can weave some magic will the ball in hand this Saturday.