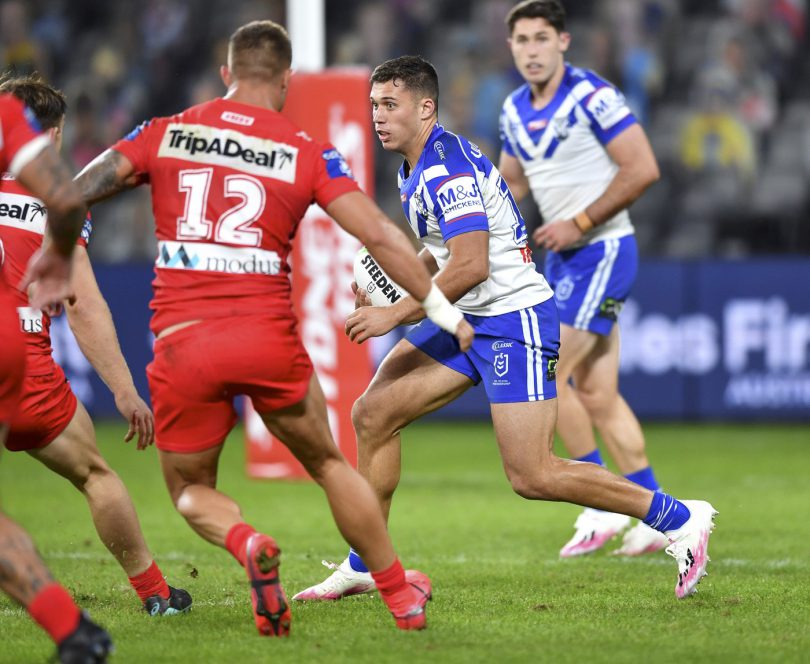 A TRY in the final minute of the game completed a remarkable Dragon comeback and denied interim Canterbury coach Steve Georgallis a win in his first game since taking over from Dean Pay.

The Dragons scored in the first and last minutes of the clash to snatch a 28-22 win over the Bulldogs, whose star Kieran Foran watched from the sideline for the final 42 minutes.
It was a disastrous end to a game Canterbury had seemingly sewn up when they led by 12 points with 24 minutes to go.
With a suspected ankle injury, Foran was forced from the field just before half-time following a high tackle and the 30-year-old never returned.
With the Dragons starting strong and scoring in the first minute, the momentum soon swung towards the Dogs when Jason Marshall-King dived over from dummy half for a 20th-minute try.
The Bulldogs maintained the pressure through penalties and Dragon errors before Meaney scored from a scrum win.
His conversion put the Bulldogs ahead for the first time and Canterbury second-rower Raymond Faitala-Mariner extended his side’s lead in the 34th minute.
Meaney’s conversion and a penalty goal after the tackle on Foran, gave the Bulldogs a 20-10 half-time lead, with a penalty kick giving them a 12-point buffer.
However the Dragons scored in the 65th minute and ensured the score was 22-22 six minutes from full-time before the last-minute try sealed the deal.
“I thought we put in a massive effort, but we kept putting ourselves under pressure, either through dropped balls or six-agains,” Foran said.
“Had we mounted a bit more pressure down their end, we would have been right.”
The Bulldogs take on the Knights this Sunday from 2pm at McDonald Jones Stadium, Newcastle.