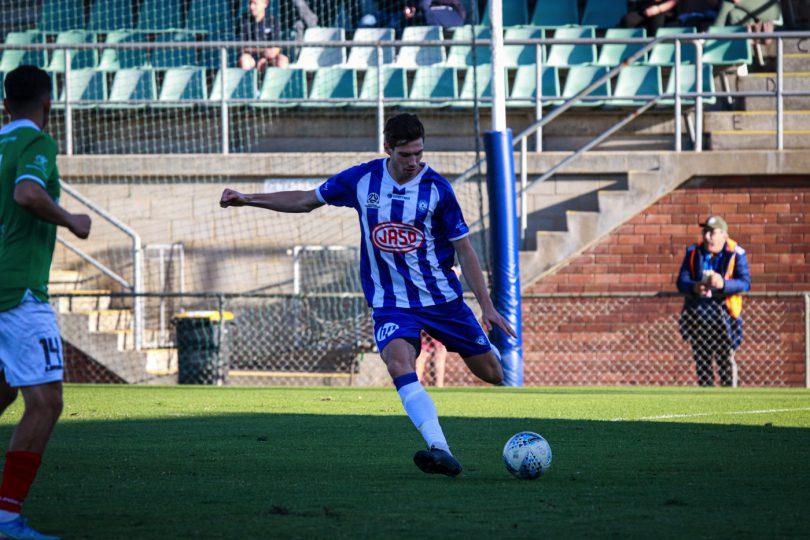 SYDNEY Olympic’s premiership hopes have gone down in flames after they were held to a 1-1 draw with strugglers Mt Druitt Town Rangers at Popondetta Park on Saturday.

Olympic wasted chance after chance, none more than when Jason Madonis missed a penalty in the 28th minute as the visitors were forced to fight back after going behind the home side in only the third minute.
It was a frustrating night for the visitors who needed a win to remain a chance of claiming an incredible premiership victory, but instead, they were unable to get the job done and will now turn their attention to making amends when the finals series kicks off next week.
Mt Druitt made a rapid start to the contest with Jack Stewart finding the back of the net in only the third minute to give the home side a surprise 1-0 lead.
The goal was a wake-up call for Olympic and they soon found their way again with Charles Lokolingoy who scored an equaliser in the 14th minute with a driven shot from the edge of the penalty area.
Olympic thought they were on their way to a win in the 28th minute after being awarded a penalty.
However, Jason Madonis failed to read the script with his attempt at a cheeky panenka penalty hitting the crossbar before being cleared away by Mt Druitt.
The game became bogged in midfield with neither side able to fashion any decent opportunities on goal as the match went into the break locked at 1-1.
Olympic was desperate to strike early in the second half but they struggled to break down a stingy Rangers defence.
Oliver Pufflett had an effort cleared off the line by the home side as the pressure to score began to take its toll on the visitors.
Peter Kekeris had one final chance for Olympic in the 90th minute but sent his free-kick agonisingly wide of the post.
The result meant Sydney Olympic had to settle for fourth place on the ladder and sets up a clash with Rockdale Ilinden FC in the first week of the finals.