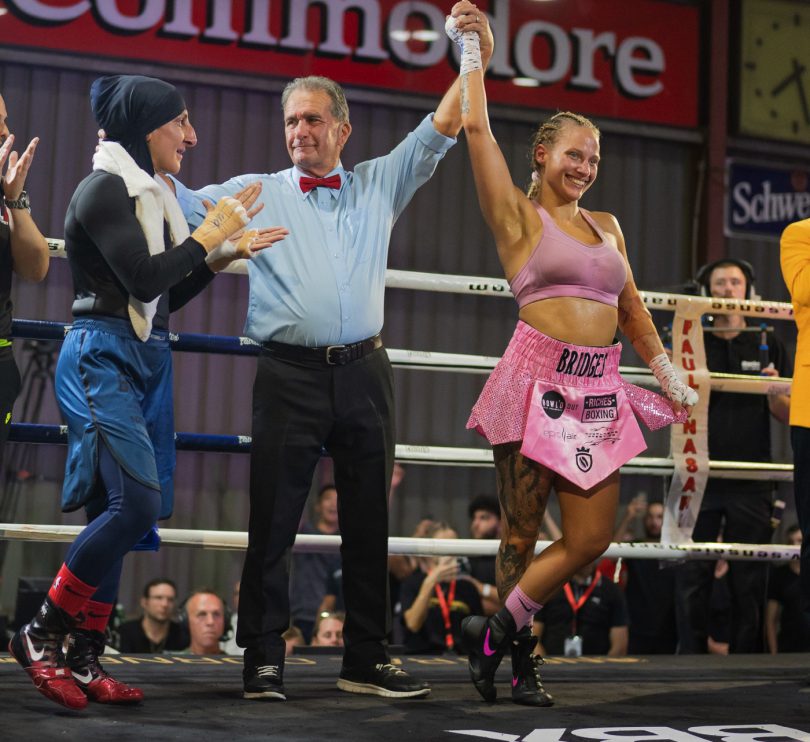 FIGHT night at Bankstown Paceway lived up to the hype right up until the final bell with Ebanie Bridges and Carrol Earl going toe to toe for the full eight rounds.

Luckily for Ebanie, a unanimous decision at the end of the eight stanzas, gave her the honours.
Packed to the rafters, the Paceway’s amateur boxing got underway at 2pm ahead of the professional boxing from 6pm – right from the opening bell, one of the main features on the undercard was Bianca Elmir and Yolanda Schmidt and these two women gave they’re all, with Yolanda winning on a split decision.
Jeff King also finally got the win after having four draws in the heavyweight division against David Leard.
It was next the lightweights’ turn to dazzle and in the main event, Alex Lual and Emmet Brown both took turns at dropping each other.
After they climbed up off the canvas at different times, though, it was Alex that got the split points, with the crowd on their feet and cheering.
Both Cotten brothers from Grafton were defeated as Bondi’s Mirko Pizzi stopped Ryan in the eight round to win the NSW junior middleweight title.
Brother Zac was unable to retain his NSW cruiserweight title when Michael van Nimwegen, who trains at Bankstown PCYC, blocked him from the win in the seventh round.
Promoter Neutral Corner’s Paul Nasari said: “All in all it was an awesome boxing event and the crowd will remember what a great fight night it was for a long time plus it was live-streamed on Smithys.tv”.
“A fantastic venue, Bankstown Paceway looks like being Canterbury Bankstown’s new home of boxing,” he said